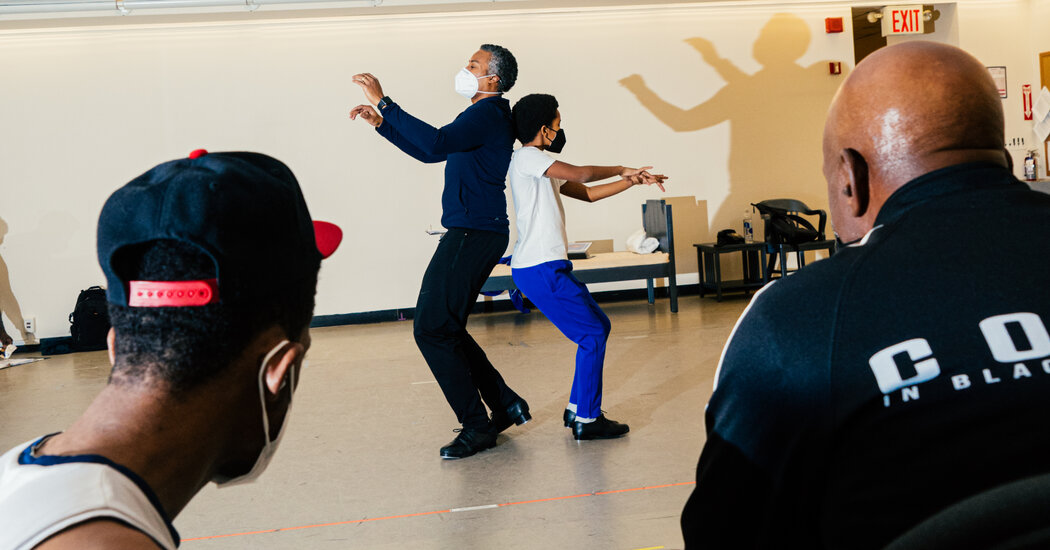 If you’re going to stage a revival of the seldom performed but dearly remembered 1983 Broadway musical “The Tap Dance Kid” — as Encores! at New York City Center is doing, Wednesday through Sunday — one of the main challenges is to find someone to play the title role.

That character is Willie Sheridan, a 10-year-old boy whose dream is to become a Broadway tap dancer and who has the talent to do it. The performer who plays him has to be like Willie: a young Black boy who can act and sing and tap dance at the center of an old-fashioned musical. And in recent decades that particular combination hasn’t been very common.

Some reasons are right there in the show’s story. It’s about a family — an upper-middle-class Black one, groundbreaking for a Broadway musical in 1983 — and the main conflicts are generational. The principal obstacle to Willie’s dream is his father.

To the father, a lawyer, tap is not just antiquated but also shameful, tied to slavery and the racial humiliations from which he has worked to insulate those he loves. To the boy and his dancing uncle and the ghost of his dancing grandfather, tap is beautiful, something to be proud of.

This is an argument about the past and progress, and it reflects some of the real-life attitudes that continue to affect the popularity of tap, especially among Black people, and the potential pool of tap dance kids.

“I knew that it was going to be tough to find a Willie,” Jared Grimes, the choreographer of the Encores! revival, said in an interview.

During auditions, Alexander Bello stood out — for his acting and singing. His tap skills weren’t quite up to the level that Grimes was expecting. “I was not going to settle,” Grimes said. “This show isn’t called Acting Kid or Singing Kid.”

But Bello — who once put “Broadway audition” on his Christmas list and is already a Broadway veteran at 13 — was determined to get the part. “I was amazed that almost all the creatives were Black,” he said. “I had never seen a room so melanated and I wanted to be in that room.” And so, while attending school and doing eight shows a week of “Caroline or Change” on Broadway, he squeezed in a month of tap boot camp with DeWitt Fleming Jr. (who plays Willie’s grandfather).

“Alex earned that role,” said Kenny Leon, the director of the Encores! production.

In certain ways, this was an echo of the 1980s. Danny Daniels — who won a Tony Award for choreographing the original production and who, like most of the original creative team, was white — once told me about the trouble that team had finding a Willie.

“I asked the producers, ‘Where are you going to find the Black kids? Black kids don’t tap anymore,’” said Daniels, who died in 2017. “So we put out a call for Black kid tap dancers. Nobody showed up.’”

More precisely, nobody showed up who didn’t need tap training. Daniels started a tap boot camp. The first Willie it produced was Alfonso Ribeiro, who soon left for a successful TV career (and later showed off his tap skills as Carlton on “The Fresh Prince of Bel-Air”). Among the many to follow during the show’s two-year run and national tour was Dulé Hill, whose own successful TV career, most recently in “The Wonder Years” reboot, is keeping him too busy to appear in the Encores! revival.

Another Willie was Savion Glover, the tap dance kid who most changed what it meant to be one. Under the guidance of Gregory Hines and older Black tap dancers, Glover became the heir apparent to their tradition in the Broadway shows “Black and Blue” and “Jelly’s Last Jam.”

The 1996 show “Bring in ‘da Noise, Bring in ‘da Funk,” which Glover choreographed and starred in, reclaimed tap as Black history, both polemically and rhythmically, and brought it into a hip-hop present that people his age could see as their own. In a monologue, when Glover rejected Broadway styles as “not even tap dancing” but “arms and legs and a big ol’ smile,” he could have been describing Daniels’s choreography for “Tap Dance Kid”: the sequins and high kicks, more razzle-dazzle than rhythm.

After “Bring in ‘da Noise” closed, tap on Broadway mostly reverted to its old ways. But Glover, with his unsurpassed virtuosity and more streetwise image, had inspired a generation of young hoofers. While deeply connected to tap’s roots in jazz, they made the form contemporary and pushed it to new technical heights — and largely away from the singing and acting of “Tap Dance Kid.” Among this cohort was Grimes, now 36.

As Grimes demonstrated in the 2013 Broadway production “After Midnight,” he is a tap dancer of astonishing head-to-toe ability. But, unlike many Glover inspired hoofers, he also sees himself in the all-around entertainer line of Hines. Alongside his flourishing performing career — he’s in the upcoming Broadway revival of “Funny Girl” — he’s found acclaim as a choreographer of regional productions, including an updated “42nd Street.”

Grimes said that he jumped at the chance to revisit “Tap Dance Kid,” which he called “the musical that every tap dancer dreams of getting a hold of.”

The context has changed from the early ’80s, and from the late ’90s, too: “When I was coming up,” Grimes said, “if I looked to my side, there were other Black kids that were already tap kings and queens, but now almost none of my students are Black.”

Speaking for kids today, Bello said tap is the dance style they “are most likely to overlook.”

“Because you either think of it as Shirley Temple or as something guys did in the ’70s,” he said. “To other kids, it seems like tap never really modernized, but that’s not true.”

Ayodele Casel, a tap dancer of the post-Glover generation whose career has been soaring lately, said that pockets of young Black tap dancers exist but that they don’t necessarily see themselves on Broadway because opportunities have been scarce. Yet, speaking more broadly, she noted the significance of someone like her, steeped in tap culture, being specially hired to handle the tap choreography for “Funny Girl.”

“There is still a gap,” she said, “between the actors and singers, who have long been able to get by with tap basics, and the serious tap dancers, who haven’t had much incentive to train in acting and singing. But I think people, artists and producers, are starting to think about tap differently now.”

Along these lines, the background of the creative team, more than of the cast, might be the most significant change in the Encores! revival. The music remains the same, by Henry Krieger in a mode similar to his “Dreamgirls.” But Lydia Diamond, who has adapted the book for the Encores! production, has shifted the story from the 1980s to the 1950s — when the lines of racial struggle were more legible and tap was losing its place at the center of American popular culture.

“We’re trying to show how something as precious as the history of tap is affecting this family who’s fighting to find a place in the ’50s,” Grimes said. He said that he’s been helping to get more accurate (and Black) tap history into the script and a sense of tap in transition into the choreography.

“I want to show tap as storytelling and crazy rhythms,” he said, “but also tip our hat to vaudeville and comedy and what might be seen as what we had to do to get into the door. We can do that with integrity.”

Grimes said this after a long day of rehearsal, eager to rehearse some more. “The security guards have to kick me out,” he said. “That’s love, man. I hope that ‘Tap Dance Kid’ will get a whole new crop of people to feel like that about tap.”

How Readers Are Reducing Their Carbon Footprint