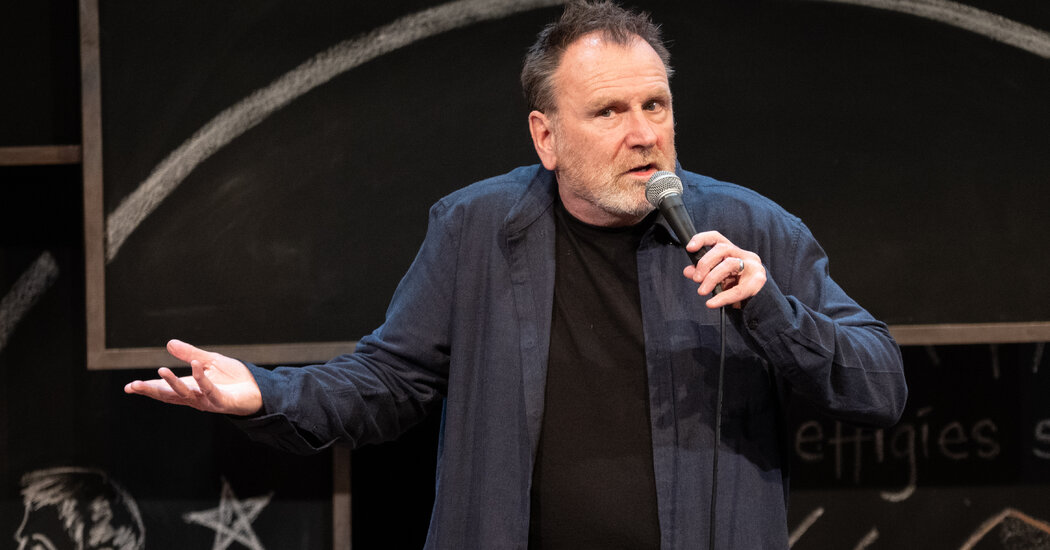 After creating solo shows on the American constitution (“Unconstitutional”), the looming civil war (“Red State Blue State”) and the history of the world (“Long Story Short”), the workhorse comic Colin Quinn has decided to take on a subject of real consequence: small talk.

It’s not as sharp of a pivot as you might think. Small talk is dismissed as shallow, but I was persuaded by Ruth Graham’s defense of it in Slate as a social glue in an increasingly divided world, or as she puts it, the “solid ground of shared culture.” Quinn clearly believes this, too. Whether you agree or not, there is little doubt we are currently facing a chitchat crisis. As Quinn deadpans in “Small Talk,” a brisk mix of charming comedy, thin history, self-help guide and various digressions that runs through Feb. 11 at the Lucille Lortel Theater, “Between phones, air pods and self-checkout, small talk is down 87 percent.”

That doesn’t even account for the isolation of the pandemic that made us all rusty at saying hello to neighbors and jawing about the weather. Meaningless banter, a subgenre of small talk according to Quinn, is its own art. Ease into conversations, and don’t be abrupt, Quinn advises; he also suggests beginning with an exhale and “whoo.” Dressed casually in button-down shirt and sneakers, Quinn is big on the virtue of long vowel sounds. He also likes nicknames, nodding and starting conversations with “Is it me, or …”

Part of his take on America is that while we may not be the most astute, we are the country with the best, or at least the most, personality, an empire built on charm, talk and salesmanship. This is why the decline of small talk matters. Quinn has no time for the idea it’s inauthentic. Its fakery is part of the appeal. Small talk has rules, and following them is more important than being your true self. Like improv, you need to listen and agree. Unlike improv, never escalate.

This might be where Quinn runs into problems, because after a promising start, he can’t help but move outside the lines of his framework to ride hobby horses. He digs into social media, how the left and right are their own cults and the distorting dangers of technology. It’s almost as if he doesn’t believe small talk is big enough.

Quinn has always been a wandering performer, with an intuitive grasp of openings and closers, but structurally messy in between. James Fauvell directs this piece with a light hand, and the production, on a bare stage, has a stripped-down aesthetic of a comedy club.

Quinn once sarcastically mocked those who tell comics to evolve with the times. But he’s done just that, moving from game show hosting to political chat (“Tough Crowd”) to “Saturday Night Live” to Twitter. He has now settled into an essential part of the Off Broadway landscape, adding a much-needed bounty of jokes to the regular theatrical menu. His material doesn’t tend to be personal, though you see hints of a shift in the end of this show, when he movingly brings up Norm Macdonald, whom Quinn rightly describes as a “master small talker,” and briefly mentions a heart attack he suffered a few years ago that nearly killed him. He’s not one to get sentimental (is it me or does that kill small talk?), but, like his last solo show, he ends by imagining how people will look back on us as a civilization when we’re gone.

He also speculates that if our country ended tomorrow, our epitaph might sound like something on a Myrtle Beach T-shirt: “America: If you can’t handle me at my worst, you don’t deserve me at my best.”

It’s a reminder that while Quinn favored sweeping ambitious subjects, his real gift, and greatest comic subject, is the comedy of language: clichés, slogans, slang. Is this stuff small? It depends on how you look at it.

For Autistic Mothers, Breastfeeding Is Complicated

FLASHBACK: Biden said it’s ‘dangerous’ to ‘delegitimize the courts’ in 2017

What Is LIV Golf? It Depends Who You Ask.