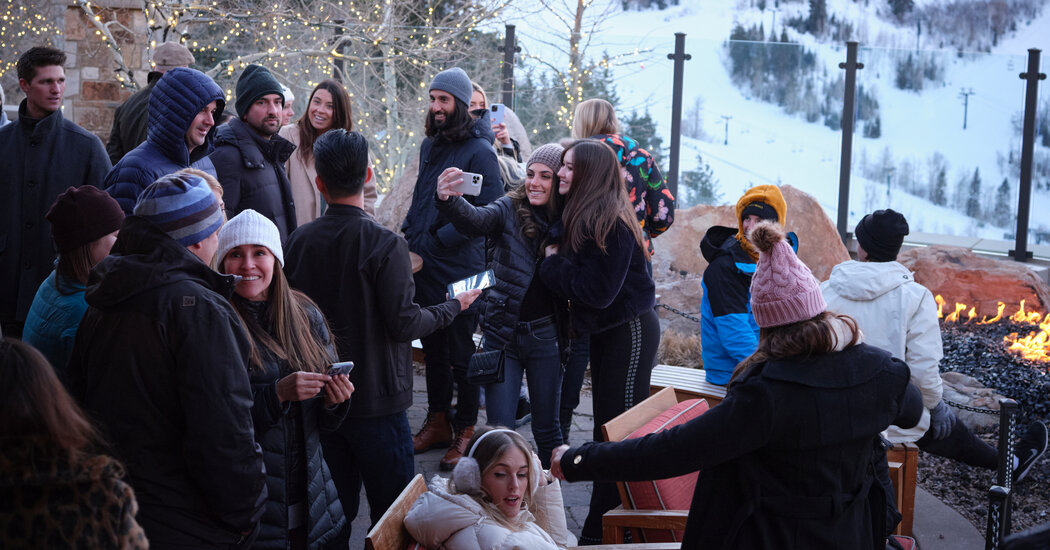 When the Sundance Film Festival announced that it was canceling all in-person events because of the pandemic two weeks before it began, festival goers could be forgiven for thinking the party was over.

There would be no screenings at the Egyptian Theater in Park City, Utah. No swag lounges along Main Street. No celebrity sightings at the Tao Park City pop-up club.

But that didn’t stop Rebecca Fielding, 34, who handles client engagement for an interior design firm in Manhattan, from boarding her flight. When she arrived last weekend, she spent the day at a spa before hobnobbing at a Main Street club with hundreds of inebriated people dancing on banquettes and bumping into each other on the dance floor.

“This is so fun,” she said, making her way to join them. “So many people are here.”

Sundance may have gone virtual this year (screenings through Jan. 30 have moved online), but many film buffs and hangers-on still made the pilgrimage to Park City. Despite the lack of official events, they found ways to party, schmooze and even watch movies.

“This has been bigger than in past years,” said Jennifer 8. Lee, 45, a documentary film producer from New York City who has organized housing and activities for hundreds of film lovers during Sundance since 2007. “I was surprised by how many people were still willing to come. We even got extra people after the festival was canceled.”

Through her film-buff group, Goodside, she had arranged for 80 to 100 people to stay across 12 houses in Park City; the guests had paid up to $500 a night for a room. (While Ms. Lee’s group allowed guests to buy out each others’ reservations, many hotel rooms and Airbnbs were nonrefundable or only eligible for a partial refund or credit when Sundance was canceled. Most airlines only offered flight credit.)

Last Saturday night, Ms. Lee held a screening for the one of the festival’s most talked-about films — Lena Dunham’s “Sharp Stick,” a comedy about a 26-year-old babysitter in Los Angeles who loses her virginity to her employer — at her six-bedroom mountainside rental house on Woodside Avenue, a couple blocks from town.

About 20 people piled onto couches and the floor, drinking cocktails and snacking on homemade dumplings and curried popcorn, while the film was projected on a screen that one of the guests had brought. To minimize risk, all guests had to take a Covid test.

“There is enough critical mass that we can do our own events,” said Ms. Lee, a former reporter for The New York Times. Following the screening, there was a group discussion of the movie.

After the screenings, the action moved to restaurants and bars around town. At Courchevel Bistro, patrons in fur vests and leather pants dined on baked Brie and elk. At No Name Saloon Bar & Grill, a rowdy sports bar nearby, servers wore “Sundance 2022” shirts and served tequila shots to packs of guys in flannel shirts and cowboy boots.

There seemed to be few of the celebrity-filled parties usually held during Sundance to promote films, fashion labels and other publicity-starved brands.

“Without the festival, we just had to get more creative in finding ways to entertain them,” said Lucien Alwyn Campbell, a V.I.P. concierge for hire in Park City who estimates that 40 percent of his Sundance clients still made the journey this year. “There were four groups who went snowmobiling. We staged seven dinner parties last night with private chefs for clients who rented homes.”

He also held house parties. “Usually, people go to the Tao pop-up during Sundance,” Mr. Campbell, 37, said, “but we obviously didn’t have it this year, so we had to create late-night places for people to dance.”

Local bars and clubs, however, remained open and were, in fact, easier to patronize since there were no invitation-only parties to crash. Downstairs, a popular club on Main Street, had a special lineup of DJs and V.I.P. tables for as little as $100 for four.

On Saturday night, DJ Spider played a mix of hip-hop and house music to a packed dance floor. By 10:30 p.m., the line to get in was 15 people deep; most of them appeared to be in their 20s and 30s, and many wore Canada Goose parkas and cowboy hats. Maskless partygoers crammed the small dance floor until the 2 a.m. closing time.

“Coming through,” said a young server in a tight black ensemble, screaming over the song “I’m Too Sexy” as she fought her way through the crowd with bottles of tequila.

In part because it was so last-minute, this year’s cancellation of Sundance did not seem to hurt local businesses as much as it did the previous year, said Brooks Kirchheimer, president-elect of the Park City Chamber of Commerce. “This has actually been great for Park City,” he said. “Usually people come to town and just sit in a movie theater for eight days. Now these people are seeing Park City in a different light. They are doing different activities.”

Many visitors talked about how they actually had time to hit the slopes this year, and how nice it was to take advantage of Park City’s terrific skiing and its lift along Main Street.

“I’ve been coming on and off to Sundance since 2001,” said Elisa Briles, 47, a communications manager for a San Francisco tech company. “This is the first time I’ve ever focus on skiing during Sundance. Usually I am too busy going to movies and parties.”

Ms. Briles was taking an afternoon break at a bar at the St. Regis Deer Valley near the Vintage Room, a large, greenhouse-like lounge that opened last month atop Deer Valley. On that Friday afternoon, the lounge was packed with would-be festival goers dressed in metallic snowsuits and furry boots, guzzling Champagne and oysters.

“I wouldn’t say it feels like a movie festival here, but it definitely feels like a really fun ski weekend,” Ms. Briles said. “I’m still with my friends. We are still meeting really cool people.”

George Crumb, Eclectic Composer Who Searched for Sounds, Dies at 92

Powell warns that further inflation surprises could loom ahead.