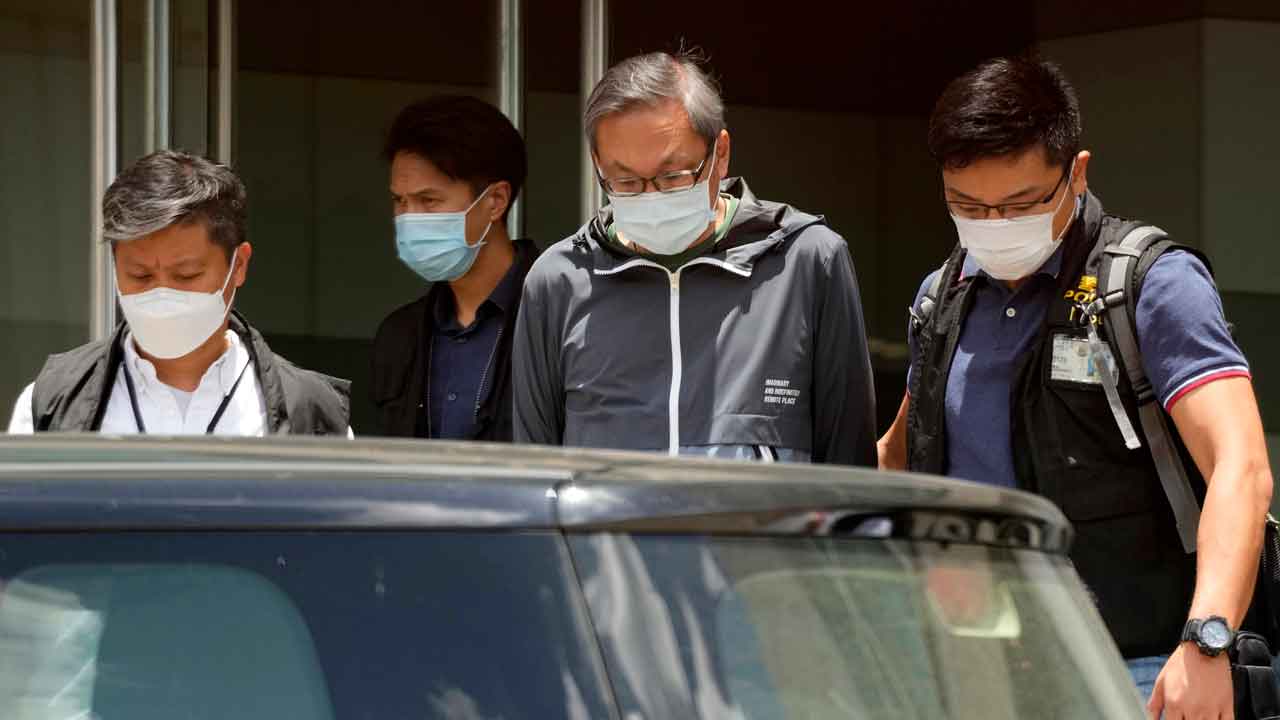 Six former executives of a now-defunct Hong Kong pro-democracy newspaper on Tuesday pleaded guilty to a collusion charge under the National Security Law that has silenced and jailed most opposition voices in the southern Chinese territory.

The staff members of Apple Daily were arrested last year during a crackdown on dissent after Beijing imposed the sweeping security law in response to the widespread anti-government protests in 2019. They were charged with conspiracy to commit collusion with foreign forces to endanger national security.

The law criminalizes acts of succession, subversion, terrorism, and collusion with foreign forces. Its maximum penalty is life imprisonment. But the six were expected to receive lesser penalties because of their guilty pleas.

Publisher Cheung Kim-hung, associated publisher Chan Pui-man, Editor-in-Chief Ryan Law, Executive Editor-in-Chief Lam Man-chung, and editorial writers Fung Wai-kong and Yeung Ching-kee, admitted they had conspired with the newspaper’s founder Jimmy Lai to call for an imposition of sanctions or blockade, or engage in other hostile activities against Hong Kong or China.

Prosecutors alleged three companies related to Apple Daily were also involved in the conspiracy from July 1, 2020 — the day after the National Security Law was introduced — to the day of the paper’s last print edition, June 24, 2021.

They pointed to the publication’s English version, alleging it was introduced by Lai for the purpose of asking foreign forces to impose sanctions or be hostile against Hong Kong or China. They said Lai was the mastermind of the conspiracy and the six acted to implement the plans. After the security law was enacted, the Apple Daily condemned the legislation as “evil law” and called for resistance, they added.

Lai and the three companies were expected to plead not guilty to their charge and their trial is scheduled to start Dec. 1. If convicted, Lai faces life imprisonment. If the companies are convicted, they could be fined and the proceeds obtained from the crime confiscated.

After hearing their pleas and the prosecution’s case, a High Court judge convicted the six. Their sentences would be handed down after Lai’s trial.

Local journalists and former Apple Daily staff were among the spectators, with some waving at the defendants before and after the hearing.

Police took away hard drives and laptops as evidence in a raid at Apple Daily’s offices in June 2021, sending shockwaves across the city’s media. The arrests of top executives, editors and journalists at the paper, as well as the freezing of $2.3 million worth of assets, led it to cease its operations. It sold a million copies of its final edition.

Hong Kong fell more than 60 places to 148th place in Reporters Without Borders’ latest World Press Freedom Index released in May. The media watchdog cited the closure of Apple Daily and Stand News, a vocal online media that gained popularity during the protests in 2019 but was forced to shut during the ongoing crackdown.

The watchdog also said the city’s press freedom saw “an unprecedented setback” since the introduction of the security law that “serves as a pretext to gag independent voices” in the name of the fight against national security crimes.

Separately, nine people were found guilty of rioting during a violent protest in October 2019 at another Hong Kong court on Tuesday. They were among the thousands of residents who were arrested for their roles in the widespread protests three years ago.

Serena Williams Will Face Ajla Tomljanovic in the Third Round

Swinging Big, the Padres Near a Deal for Juan Soto