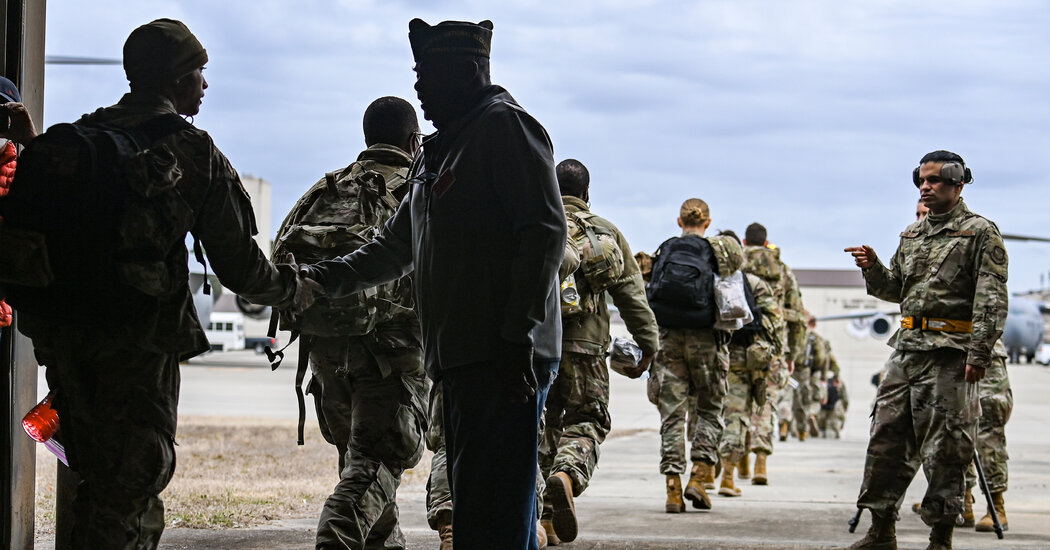 WASHINGTON — President Biden flexed America’s military power in hopes of deterring a Russian invasion of Ukraine with his announcement this week that 3,000 U.S. troops were heading to Eastern Europe.

But Mr. Biden is not readying for war with Russia. The troops will be shoring up NATO countries, not defending Ukraine itself — which is not a member of the alliance — as President Vladimir V. Putin of Russia builds up military forces near the borders of its neighbor.

And lest there be any misunderstanding, Mr. Biden has repeatedly made clear that he has no intention of sending U.S. troops to Ukraine. During national security crises, presidents often issue the cryptic warning that “all options are on the table.” But Mr. Biden pointedly said in early December that the military option was “not on the table.”

“There is not going to be any American forces moving into Ukraine,” Mr. Biden reiterated to reporters last month.

Mr. Biden was reflecting a political reality in war-wary Washington, where even many reliably hawkish voices in both parties show no appetite for seeing U.S. troops fight and potentially die for Ukraine. His thinking is also surely informed by the frightening reality of Russia’s 4,500-warhead nuclear stockpile, which experts say Moscow would be quick to use, at least on a limited scale, in any losing fight with the West.

That position has frustrated some Russia hawks who believe it wise to keep Mr. Putin guessing about America’s intentions — and even a few who say the United States should be prepared to go to war for Ukraine.

“Putin is someone who responds to brute force. And he is willing to pay a very high economic price for Ukraine,” said Ian Brzezinski, a former deputy assistant secretary of defense for Europe and NATO policy under President George W. Bush. “So Biden diluted our most important source of leverage in this crisis.” Mr. Brzezinski said that, among other actions, Mr. Biden should consider sending troops to western Ukraine as a deterrent.

But Mr. Brzezinski is part of a distinct minority. In a Thursday address on the Senate floor, Senator Ted Cruz, Republican of Texas and an outspoken critic of Mr. Putin, said some people feared that “Biden will send American troops into Ukraine and start a shooting war with Putin if Russia invades.”

“I want to be clear and unequivocal,” Mr. Cruz added. “Under no circumstances should we send our sons and daughters to die to defend Ukraine from Russia.”

It is a rare point of agreement between Mr. Cruz and liberal Democrats, and even former President Barack Obama, who told The Atlantic magazine in 2016 that Ukraine was “an example of where we have to be very clear about what our core interests are and what we are willing to go to war for.”

As a political matter, this was an easy call for Mr. Biden, who took pride in ending America’s 20-year war in Afghanistan last year, declaring, “We’ve been a nation too long at war.” A YouGov poll of U.S. citizens conducted from Jan. 24 to Jan. 26 found only a third of respondents favored the United States arming Ukrainian forces if Russia invaded the country. Just 11 percent said they would support sending U.S. troops to Ukraine to fight Russians forces. (Four percent said they would back a direct American attack on Russia.)

Such sentiments are likely fueled in part by the commentary of prominent right-wing figures like Fox News host Tucker Carlson, who has said the United States has no real stake in Ukraine’s fate at all, and former President Donald J. Trump, an admirer of Mr. Putin who told supporters at a Saturday rally, “Before Joe Biden sends any troops to defend a border in Europe, he should be sending troops to defend our border right here in Texas.”

The Republican view is not unanimous, however. “I would not rule out American troops on the ground,” Senator Roger Wicker of Mississippi said in December, in response to Mr. Biden’s pledge. Mr. Wicker noted that the United States could “rain destruction on Russian military capability” from a distance, using naval forces in the Black Sea.

And even one former Obama official has gone further. Last month, Dr. Evelyn N. Farkas, a former top Pentagon official for Russia, wrote an essay headlined “The U.S. Must Prepare for War With Russia Over Ukraine.”

If it doesn’t, she wrote, “Putin will force us to fight another day, likely to defend our Baltic or other Eastern European allies.”

But many foreign policy veterans call such talk pointless given the underlying realities.

“You should not make threats that you are not prepared to keep,” said Ben Rhodes, a former deputy national security adviser to President Barack Obama. “The American people are not prepared to go to war directly with Russia over Ukraine, and Joe Biden has to reflect that reality, because he’s the president of a democracy — unlike Vladimir Putin.”

Some analysts say that Mr. Biden’s aversion to direct force, however understandable, leaves a disconnect between what he calls the world-historical stakes of the moment and how he is willing to respond.

Former President George H.W. Bush justified the 1990 Gulf War to expel Iraq from Kuwait largely on the grounds that the U.S.-led coalition was defending an international order — “a world where the rule of law, not the law of the jungle, governs the conduct of nations.”

Last month in Berlin, Secretary of State Antony J. Blinken delivered a speech laying out in similar terms what he called Mr. Putin’s threat to “the governing principles of international peace and security.” The consequences of a Russian invasion would be “catastrophic,” he said,

Asked the next day why the Biden administration would not contemplate fighting for those principles, Mr. Blinken said assistance to Ukraine and economic threats were the “most effective” way to deter Mr. Putin. And he noted that Ukraine was not a part of NATO, whose members are bound under Article 5 of the alliance’s treaty to defend one another from attack.

Unmentioned in public by Biden officials is Mr. Putin’s ultimate deterrent: his nuclear arsenal. Military strategists differ on whether the United States and Russia could realistically wage a non-nuclear war.

Because of its comparatively weaker conventional forces, Russian military doctrine accepts the relatively early use of nuclear weapons against the United States or NATO, said Jeffery Edmunds, a former National Security Council director for Russia in the Obama White House.

“For them, nuclear weapons are not above this weird glass ceiling the way they are in the United States,” Mr. Edmunds said. Initially, at least, he said Russia would turn to tactical battlefield weapons and not the strategic ICBM attacks on American cities that could trigger all-out nuclear war.

As recently as August 2008, when Mr. Putin sent his forces into neighboring Georgia, officials in the George W. Bush administration considered limited military action to support the outmatched Georgian government. After debating several options — including a surgical airstrike to collapse a key tunnel through which Russian forces were moving — the Bush team shelved the idea, according to “The Little War That Shook the World,” a 2010 study of the conflict.

Mr. Brzezinski pointed to what he called a counter example: In February 2018, U.S. troops in Syria came under attack by a pro-regime force largely composed of members of the Wagner Group, a private Russian mercenary organization with ties to the Kremlin. A U.S. counterattack killed an estimated 200 to 300 Russian mercenaries. Russia did not retaliate.

“Those were basically uninformed extensions of the Russian military,” Mr. Brzezinski said. “That had a very sobering effect on Putin. He backed off.”

While little appetite exists in Washington for testing that proposition, a full-scale Russian invasion could change that sentiment.

Even among those who support Mr. Biden’s decision to send troops to NATO’s eastern flank, there is growing concern about the possibility of deadly accidents or miscalculations.

“There is an intentional war where we would choose to fight Russia, and I think that is just completely off the table,” said Andrea Kendall-Taylor, a Russia expert with the Center for a New American Security who advised the Biden transition team. “And then there is the risk of unintended escalation.”

Wanted or not, she added, “the risk of direct confrontation with Russia now is higher than at any time since the Cold War.”