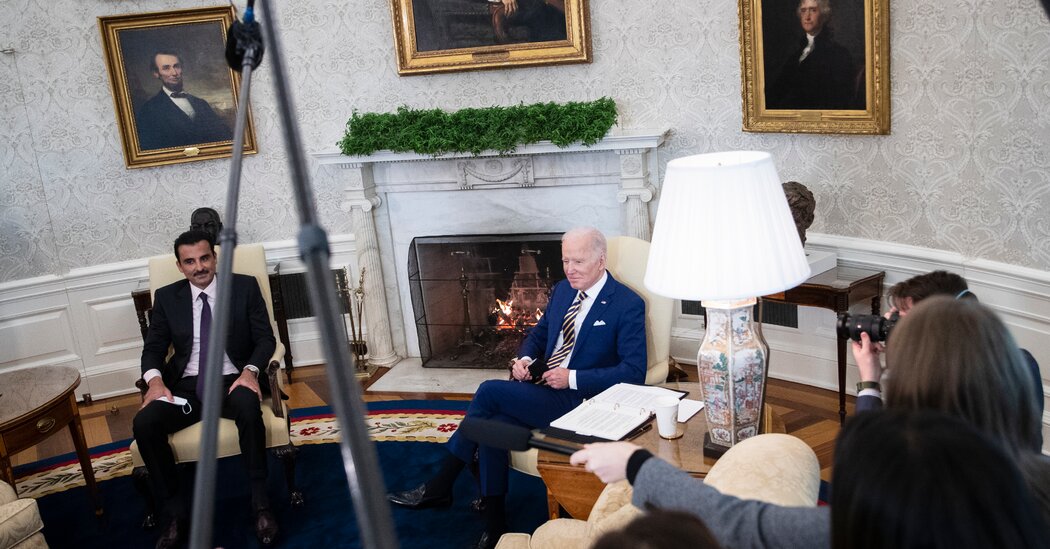 WASHINGTON — President Biden on Monday named Qatar as a “major non-NATO ally” of the United States, a designation that clears the way for greater security cooperation and investment in the Gulf nation at a time when Mr. Biden is seeking help boosting natural gas supplies in Europe.

The president is eager to reassure European nations that they will not suffer natural gas shortages if a war between Ukraine and Russia breaks out in the weeks ahead. Russia is one of the largest suppliers of natural gas to Germany and other countries in western Europe.

Mr. Biden informed reporters of the planned designation on Monday before a meeting at the White House with Sheikh Tamim bin Hamad al-Thani, the emir of Qatar. The president praised the relationship between the two countries over the past half-century on issues like Afghanistan, the dispute between Israel and the Palestinians, and the fight against the Islamic State.

“I am notifying Congress that I will designate Qatar as a major non-NATO ally to reflect the importance of our relationship,” Mr. Biden said. “I think it’s long overdue.”

Understand Russia’s Relationship With the West

The tension between the regions is growing and Russian President Vladimir Putin is increasingly willing to take geopolitical risks and assert his demands.

Conferring the status of “major non-NATO ally” on a country does not guarantee that the United States will come to the defense of that country in the event of an attack. That guarantee — laid out in Article 5 of the North Atlantic Treaty Organization’s founding treaty — is limited to full members of the alliance.

But the designation gives Qatar more diplomatic prestige and access to technology, security systems and training by U.S. defense forces that has not been previously available to it. The move is often used to prod countries toward closer ties with the United States and other Western nations.

Mr. Biden formally notified leaders in Congress of the designation in a letter, just hours after his statement to reporters.

“I am making this designation in recognition of Qatar’s many years of contributions to U.S.-led efforts in the U.S. Central Command area of responsibility and in recognition of our own national interest in deepening bilateral defense and security cooperation with the State of Qatar,” Mr. Biden wrote.

The looming conflict between Russia and Ukraine is the immediate concern for Mr. Biden, who is seeking to maintain unity with America’s European allies behind threats of sanctions on Russia if President Vladimir V. Putin decides to invade.

Concerns about the possibility that Russia might restrict the flow of natural gas to Europe could undermine that unity, and White House officials have said they are working with other nations around the world to provide reassurances to European leaders if that should come to pass.

In a readout of Mr. Biden’s meeting with the emir Monday evening, the White House did not specifically reference the Ukraine situation.

“Together, they reaffirmed their mutual interest in promoting security and prosperity in the Gulf and broader Middle East region, ensuring the stability of global energy supplies, supporting the people of Afghanistan, and strengthening commercial and investment cooperation,” the readout said.

In the case of Qatar, Mr. Biden is also hoping to deepen economic and security ties. In his remarks on Monday, the president applauded an announcement by the chief executive of Qatar Airways of a $34 billion deal to purchase planes from Boeing. Mr. Biden said the deal would support tens of thousands of jobs in the United States.

Under terms of the deal announced Monday, Qatar Airways will purchase a new super cargo plane from Boeing, the 777-8 freighter. Stan Deal, the C.E.O. of Boeing Commercial Airplanes, said in an announcement at the White House that “Qatar Airways’ selection of the efficient 777-8 freighter is a testament to our commitment to provide freighters with market-leading capacity, reliability and efficiency.”

Akbar Al Baker, chief executive of the Qatar Airways Group, called it the launch of “the most significant new freighter aircraft for a generation.”

White House officials called the deal between the two companies one of the largest in Boeing’s history and said it would benefit Americans by supporting tens of thousands of jobs at Boeing and its affiliated companies.

A Thunderous Farewell at Duke for Coach K, Even in Defeat

The White House outlines the beginning of a vaccination campaign for the youngest children.

White House shrugs off question on Biden’s recent ‘semi-fascist’ rhetoric: ‘We understand we hit a nerve’