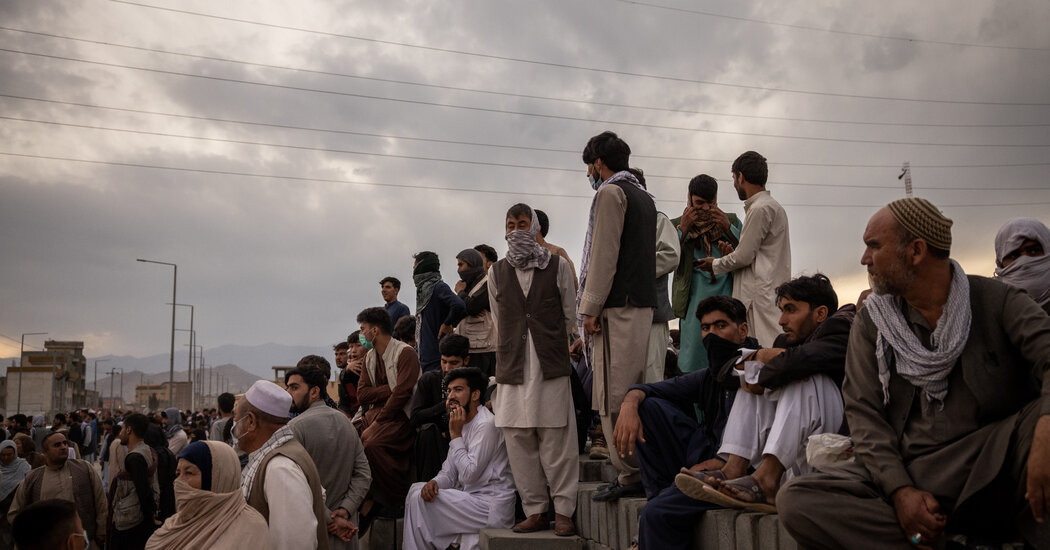 WASHINGTON — During the frantic evacuation from Afghanistan in August, the American troops securing the Kabul airport against suicide bombers and other dangers were not alone. At the direction of the C.I.A., agency-trained Afghan counterterrorism squads helped patrol the perimeter, secure the gates and get American citizens through them.

Those Afghan commandos stayed to the end, and were among the very last allies to be evacuated. But even as some 80,000 other Afghan refugees quickly reached the United States, hundreds of the C.I.A.-backed fighters and their families are among thousands who remained stuck at a sprawling refugee compound in the Emirati desert.

As weeks have turned into months, some members of the C.I.A.-backed squads — which at times over the past two decades were accused of killing civilians and other wartime abuses — say they feel abandoned, victims of a chaotic withdrawal in which the speed with which departing Afghans reached the United States was often determined by nothing more than what kind of plane they left on.

Biden administration officials say they are on track to eventually come to the United States.

But the plight of the commandos underscores the issues continuing to plague the extensive evacuation, vetting and resettlement efforts five months after the abrupt Taliban takeover of Afghanistan in August.

At the most basic level, all of the Afghans who helped the NATO forces during the 20-year Afghanistan war and are now in Abu Dhabi are fortunate: They got out with their families and are safe. Since August, there have been a slew of nonjudicial killings carried out against former government security force members who remained in Afghanistan.

But interviews with half a dozen officials involved in the effort and people familiar with the accounts provided by some of the commandos help illustrate the major differences in how Afghans who got out are being treated based on which planes they boarded at the Kabul airport.

Afghans who got onto American military planes are the more fortunate: They were taken to bases where deals with host countries allowed them to stay for only a few weeks. After they were vetted at such temporary transit locations, the Homeland Security Department invoked a rarely used “humanitarian parole” power to swiftly move them to the United States.

As a result, nearly all of those roughly 80,000 Afghans have now already been able to reach the United States. Most of them have been resettled and are starting new lives — even though their applications for permanent status with a Special Immigrant Visa, or S.I.V., are still being processed.

By contrast, those Afghans who boarded non-American evacuation flights, such as charters operated by the United Arab Emirates, were taken to facilities in host countries where they can stay indefinitely, including the U.A.E.-run compound known as Emirates Humanitarian City. A significant portion of its roughly 9,000 refugee residents are C.I.A.-trained fighters and their families, according to people familiar with the matter.

A vast majority of thousands of C.I.A.-trained fighters and their families have already been relocated to the United States, American officials said. But that has made the waiting for the hundreds in United Arab Emirates all the more painful, according to the former Afghan commandos.

Because those Afghans in places like Humanitarian City are safe, the United States is processing them through regular bureaucratic order, officials said. As a result, they are being required to wait there until their S.I.V. applications are completed — which can take many months. Requirements for vaccinations and medical tests can further slow the process.

Biden administration officials were reluctant to talk about or acknowledge the C.I.A.-backed squads specifically. But they insisted that all the evacuees in Humanitarian City and other countries would be treated fairly.

“We’re working to develop a standardized process that ensures we make good on our commitments to our Afghan allies,” Emily Horne, a National Security Council spokeswoman, said in a statement. “We cannot underestimate the anxiety that they and their families must feel. Those of us working on this want to alleviate that anxiety as best we can and make good on our country’s pledge to them.”

One official said that about 500 S.I.V. applicants a week reach a stage in the process where the State Department places them in a queue for eventual transfer to the United States, and that about a quarter of the population of refugees in Humanitarian City is now at that stage.

But that official also said even for that group, it was likely to be several more months at best before those applicants would complete other steps in the visa process. Another official said it was likely to be another five months before the C.I.A. fighters and their families were able to come to the United States.

The fighters are unlike most other refugees in a number of respects, not least the key role they played in working with the C.I.A. on the counterinsurgency and counterterrorism campaigns, in which they were often sent to kill or capture high-profile targets such as those in the Taliban’s violent Haqqani network and Al Qaeda.

Their American trainers saw them as efficient and reliable at fighting the Taliban. But many Afghan civilians accused them of their own acts of terror: violently raiding rural villages, indiscriminately killing civilians and abusing prisoners.

In 2019, a report by Human Rights Watch accused the C.I.A.-trained counterterrorism forces of killing civilians during night raids meant to strike at terrorist cells. The report detailed 14 cases where C.I.A.-trained units committed “serious abuses” between 2017 and 2019.

Tammy K. Thorp, the chief spokeswoman for the C.I.A., said the United States takes accusations of human rights abuses seriously, but the allegations against the agency’s partners in Afghanistan were simply not true. “A false narrative exists about these forces that has persisted over the years due to a systematic propaganda campaign by the Taliban,” she said.

Multiple senior American officials said that the counterterrorism fighters were not being evaluated with greater caution because of the type of role they played in the war, and that they were on track to receive S.I.V. status. The officials spoke on the condition of anonymity because of the nature of the work done by the Afghans in conjunction with the C.I.A.

And after The New York Times began asking questions about the group, American officials have tried to reassure them that they will get visas to enter the United States in the next three to six months, according to people briefed on the conversations.

That two-tiered system in which some Afghans must complete their visa process before entering, another official said, reflects the scale of the challenge: American programs that resettle refugees are already overwhelmed, having been cut back in the Trump years and then being faced with the huge influx of Afghans. There are still about 12,000 Afghans at domestic military bases awaiting matching with resettlement agencies that will move them to a city and help them get started, officials said.

There are also smaller groups of Afghan refugees still hoping to come to the United States scattered about elsewhere, including about 250 at a transit zone in Qatar. And there are about 200 at a NATO base in Kosovo, comprising several dozen men who were weeded out in the initial vetting of those otherwise eligible for humanitarian parole and so are undergoing additional screening, along with relatives staying with them.

But even as American officials counsel patience, those who find themselves still waiting in the desert outside Abu Dhabi are growing frustrated. Those feelings appear particularly sharp among the counterterrorism units, who say they served the United States at significant personal risk to the end — even as other units surrendered to the Taliban or melted into the countryside.

“These guys should get credit for doing what they did for 20 years — fight our common enemy, Al Qaeda and the Taliban,” said Mick Mulroy, a retired C.I.A. paramilitary officer and Afghanistan veteran.

Mr. Mulroy said he was not criticizing the Emirates, and praised the U.A.E. for taking in the Afghan refugees. But he said the United States, within procedures, should speed their passage to America.

In conversations with Americans, the fighters have described conditions in Humanitarian City as strained and increasingly unpleasant, adding to their sense of being forgotten.

The facility is essentially a collection of makeshift hotels designed for short-term stays. It was established in 2003, initially to be a hub to help aid workers traveling to disaster areas. Last August, the Emirates agreed to host 5,000 evacuees at Humanitarian City, though far more are there now.

While food is plentiful, people familiar with the daily lives of residents said it had been a source of recurring complaints among the refugees.

In particular, one of the people described the food as cooked and spiced in an Indian style, saying the Afghan evacuees find it unpalatable. It is also sometimes spoiled: The person provided The Times with pictures and videos showing moldy eggs, spoiled meat, rice served with shreds of paper mixed in and rotting potatoes. The person said some children had food poisoning this month, forcing a temporary halt in meal service.

Lines to see a doctor to obtain vaccinations required for admission to the United States or other medical care are hours long, the people familiar with residents’ complaints said, and the medicines are often out of stock when they seek to fill their prescriptions. Most of the medical personnel are Indian or Ugandan, requiring translators.

In a statement, the Emirati Embassy in Washington said it had assisted in the evacuation of more than 40,000 people from Afghanistan. The Emirates has provided food and health services along with schooling and recreational activities in the air-conditioned facilities of Humanitarian City, the embassy said. The facilities in Humanitarian City were designed to house people only temporarily, the embassy said, and the United States is leading the effort to transfer evacuees.

A senior administration official said conditions in Humanitarian City were as good as or better than those of refugees still at American military bases, which have also been strained because they were not designed to house large numbers of refugees for a long time.

But Afghans in the Emirates said they would rather be in the United States while going through the visa process so they can begin their search for work and a new life immediately. And the longer they wait, the more the Afghans worry they may not make it to the United States.

Former C.I.A. officers who worked with them said their efforts on behalf of America should be recognized.

“These guys have literally been fighting every night for 20 years,” Mr. Mulroy said. “They are really skilled. They have proven themselves.”

Jay Inslee, governor of Washington, tests positive for the virus.

‘Ms. Marvel’ Introduces a New Hero (and a New Actress)

Dick Cheney excoriates Trump in an ad for his daughter Liz Cheney.

An Engaged Woman Sees the Ghosts of Relationships Past