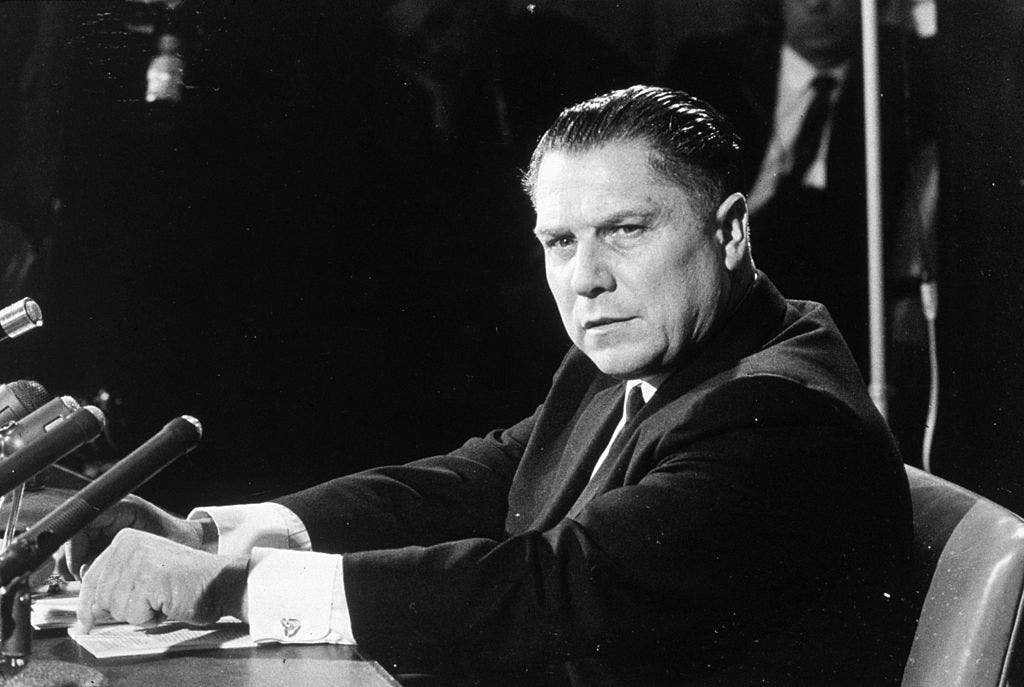 The latest search at a site in Jersey City, New Jersey early last month came up empty, but its undertaking shows the dedication and determination of the bureau to solve the iconic case that started when the legendary labor leader vanished in Detroit 47 years ago today. He was believed to be on his way to a meeting with two top Detroit and New Jersey Mobsters.

The two original FBI suspects who are still alive declined to talk to me about what happened. No one has ever been charged.

As leader of the powerful Teamsters Union, Hoffa was rumored to have connections with organized crime and served four years in prison for various offenses, he  disappeared in 1975 after going for a meeting with Teamster bosses and reputed Mafia figures Tony Provenzano and Anthony Giacalone in a Michigan restaurant.
(MPI/Getty Images)

There are also two major competing theories about Hoffa’s fate. After he was killed by mobsters in Detroit, his body was either taken the Central Sanitation facility in nearby Hamtramck and incinerated, or his remains were transported to New Jersey and buried there.

“He was most likely incinerated and there is no body and we have been running around for fifty years looking for a body that doesn’t exist,” says Detroit crime investigator Scott Burnstein, who has covered the case for decades and runs the website

Burnstein says the Detroit crime family was more than capable of handling the Hoffa hit on its own.

“This is a family in Detroit that has a PHD in Mafia murder. No member of this crime family has been indicted nor convicted of a homicide in almost 100 years. This is a group that knows what they are doing, which is why they were tasked with getting rid of Hoffa and they did it to the best of their ability and frankly, they didn’t need any help.”

Teamsters union vice president Jimmy Hoffa autographs a placard for him for a group of women campaigning for his run for president of the Teamsters, Miami Beach, Florida, October 1, 1957.
(Underwood Archives/Getty Images)

The latest FBI search last month came from a tip that was part of the Fox News and Fox Nation investigation and our ongoing series about the case, “Riddle, The Search for James R. Hoffa.”

Paul Cappola, Jr., a Tampa, Florida based lawyer was watching the Fox News Channel on a Sunday in 2019, as he regularly does. But an update on the “Riddle” investigation stopped him cold, and he knew he had to get his brother, Frank, to tell the story that had been in their family for decades.

The story is this: Paul and Frank’s father, Paul Cappola, Sr., co-owned a mob connected waste dump under the elevated Pulaski Skyway in Jersey City, New Jersey, the PJP Landfill. Their father was a businessman…but his partner was Genovese Crime Family mobster Phil Moscato, Sr., known to all as “Brother.” That is why the 87 toxic waste site was commonly known as “Moscato’s dump.”

Frank said that his father buried Hoffa in a barrel, 12 feet down, after it was delivered to the dump a few days after Hoffa vanished. He said that his Dad felt badly about it all of his life, but had no choice because if he did not bury Hoffa, he would have been killed by the mobsters.

It is against the law for Fox Nation to dig at the site.

Author Dan Moldea collaborated with our effort and worked extensively with Fox News and Fox Nation in our joint exclusive investigation.

Jimmy Hoffa, President of the Teamster’s Union, testifying at a hearing about labor rackets.
(Keystone/Getty Images)

In October last year agents from the Detroit FBI office, which is in charge of the case, and the Newark office visited the site to conduct ground tests and in early June searched the site but came up empty.

The son of the dump’s other owner, Genovese Crime Family mobster Phil “Brother” Moscato, says however, that while Hoffa’s body was brought to New Jersey as Frank said, his father then moved the body elsewhere after the FBI was told by a mob informant in 1975 that Hoffa probably was buried at the dump.

Moscato, Jr. has not publicly revealed the location, saying that he wants to ensure the integrity of his claim.

The two FBI Hoffa suspects who still alive both live in New Jersey, one not far from the old Moscato’s dump. Gabe Briguglio and Stephen Andretta appeared before the grand jury investigating Hoffa’s disappearance in Detroit in 1975 and have kept quiet ever since. Both did not wish to comment when I have met them.

The FBI will not give up in its attempts to finally solve nearly five decade old mystery.

“There is nobody more invested in putting this thing do bed than the FBI,” says Burnstein. “They want all the loose ends tied up. So the idea that they would not exhaust every remedy available to them to do that ,is an incorrect inaccurate posture and I have faith that the FBI did what they were supposed to do and the case now points back to Detroit.”

Jimmy Hoffa’s family, his daughter Barbara Crancer, a retired St. Louis Judge who is now in her 80’s and son James P. Hoffa, the retired president of the Teamsters, await more evidence and the final clues that could bring them, and the nation, some answers after all these years.

“We do not currently anticipate any additional activity at the site,” said Special Agent Mara Schneider, the spokesperson for the FBI Detroit office, about the Jersey City location. But she added that the bureau will not walk away from any credible information.

“The FBI will continue to pursue any viable lead in our efforts to locate Mr. Hoffa,” she said.

Here’s how the grain deal between Ukraine and Russia will work.

Crenshaw calls for ‘accountability’ in Uvalde police response: ‘Protocols were not followed’

On Daylight Saving, There Are More Options Than You Might Think

New Playwrights’ Voices, in the Land Where Directors Rule