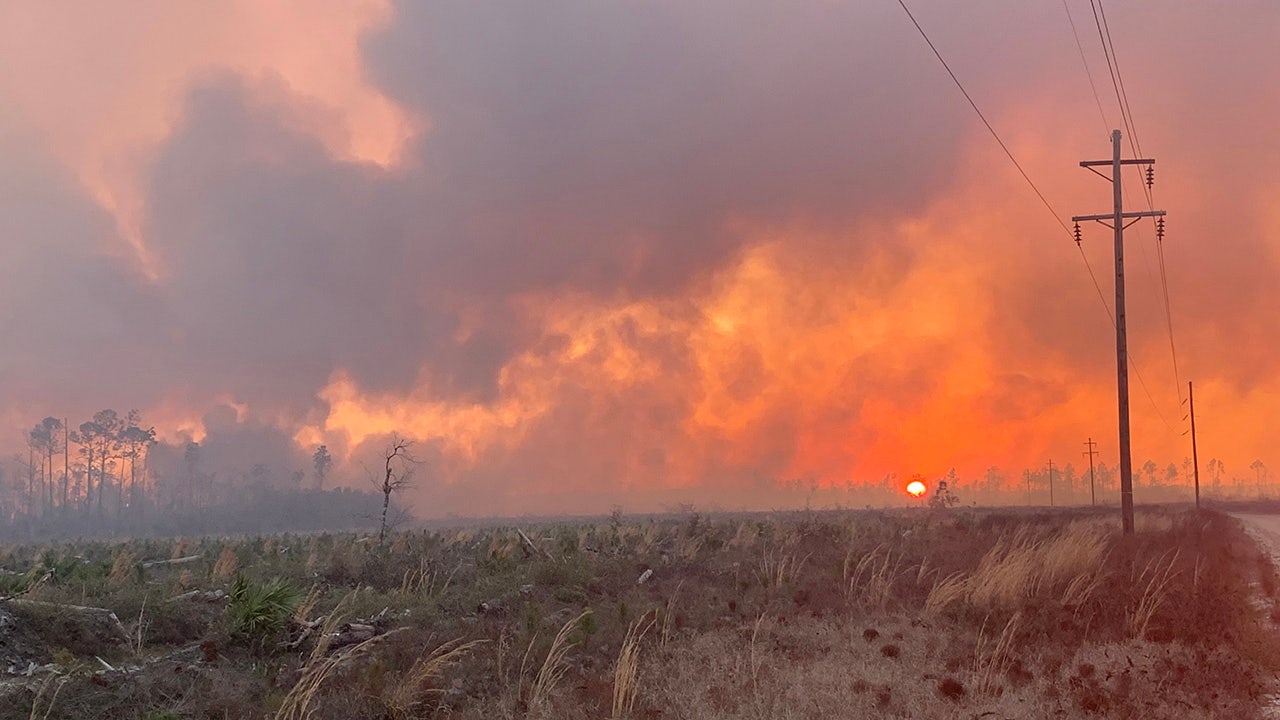 Massive wildfires in the Florida Panhandle have scorched thousands of acres and forced the evacuation of at least 1,100 homes as firefighters battled gusting winds to contain the blazes on Tuesday.

There were at least 160 wildfires burning more than 18,500 acres across the state, the Florida Forest Service (FSS) said Monday evening. The Bertha Swamp Road fire, the largest of the blazes, was estimated at more than 14,000 acres at the time.

“It’s moving very quickly,” DeSantis said of the fire during a news conference in Panama City on Sunday afternoon.

Meanwhile, the 875-acre Adkins Avenue fire has destroyed at least two structures and damaged another 12 homes in Bay County since late Friday, forcing the evacuation of at least 600 homes.

FFS helicopters had dropped more than 103,000 gallons of water on the Adkins Avenue fire since Friday, and 25 bulldozers had been deployed to plow fire lines. The blaze was 50% contained Monday morning, officials said.

On Sunday, a third fire developed, forcing the evacuation of a 120-bed, state-operated nursing home in Panama City. The Star Ave fire is estimated at 250 acres and is 60% contained, officials said.

The much-larger Bertha Swamp Fire started in neighboring Gulf County on Friday but spread to Bay and Calhoun counties Saturday, forcing the evacuation of scores of more homes.

Officials deployed a “strike team” of heavy bulldozers to build fire lines and defensible space around communities near Bear Creek along with 19 tractor-plows to contain the fire, the FFS said. It was 10% contained as of Tuesday morning.

“It’s just hard to believe that something could be that big,” said Brad Monroe, chief of Bay County Emergency Services. “If you fly around it, it’s just incredible. It’s hard to comprehend how big, strong and fierce this fire is.”

With the state’s wildfire season just beginning, firefighters will also have to battle strong wind gusts as they work to contain the fires.

“We are looking at high, sustained winds of 10 to 15 miles per hour, gusting up to 20 to 25 miles per hour,” Joe Zwierzchowski, a spokesman for the Florida Forest Service, said Sunday. “So that’s going to make it a very dynamic situation.”

Trump says Mar-a-Lago raid was from left field and ‘with no warning,’ says he was ‘cooperating fully’ with FBI