Here’s What We Know About the Walmart Shooting in Virginia 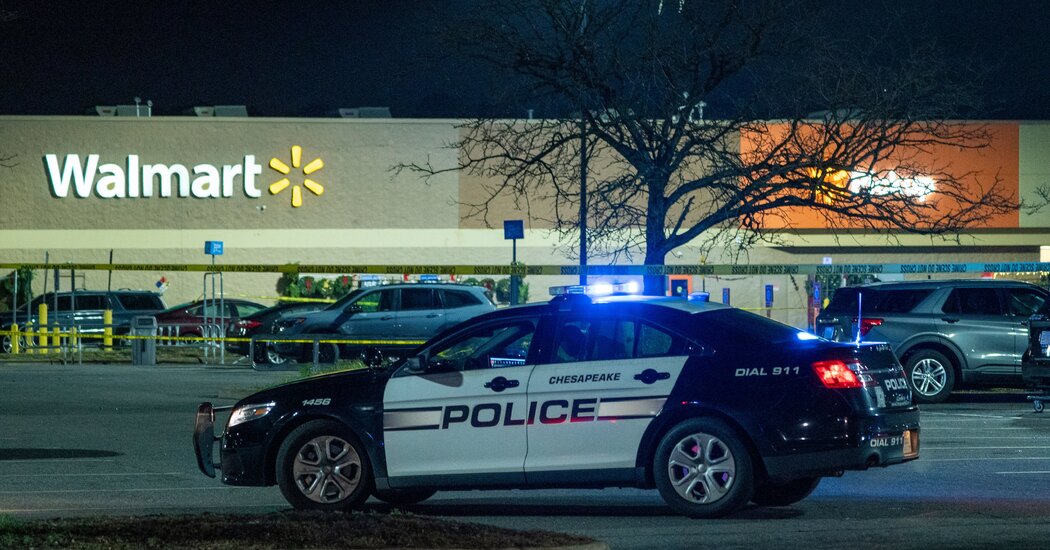 Follow our latest updates of the Walmart shooting in Virginia.

An assailant shot and killed at least six people inside a Walmart in Chesapeake, Va., on Tuesday night and was later found dead, the police said, adding to the series of shooting attacks this month in the United States.

Over the weekend, a gunman killed five people in an L.G.B.T.Q. club. A week earlier in Charlottesville, Va., a former football player shot and killed three members of the University of Virginia football team in a garage. Here’s what we know about the latest attack.

The store seemed busy in the hours before the shooting, a shopper said.

Officers from the Chesapeake Police Department responded to a report of a shooting inside the Walmart at about 10:12 p.m. and found dead and injured people in the store, said Leo Kosinski, a department spokesman. The assailant, whose name the authorities did not release, was found dead, he said.

Mr. Kosinski added that he did not believe any shots had been fired by police officers.

Earlier in the evening, the store seemed particularly busy, Terri Brown, who left the store about 8:30 p.m., told a local television station. Because of the Thanksgiving holiday crowd, she had to park far from the store, she said, and saw long lines at checkout counters.

How the attacker died and a possible motive are not known.

The police have not released the attacker’s name or other identifying details, and have not said how the assailant died or speculated about any motive.

Mr. Kosinski said investigators did not know whether the attacker was an employee of the store.

The Walmart store had many potential hiding spots.

The Walmart supercenter where the shooting took place is “very, very large,” Mr. Kosinski said, though he did not know the square footage. It includes a grocery store, a pharmacy, a bank, a bakery and a deli.

Mr. Kosinski said that officers were searching for more victims inside the store shortly after midnight on Wednesday.

The store had a lot of places people could hide, Mr. Kosinski, said: “People could get scared, they could be hiding.”

Benjamin Ginsberg, an election lawyer, has been one of Trump’s foremost Republican critics.

Colorado wildfires destroyed up to 1,000 homes.