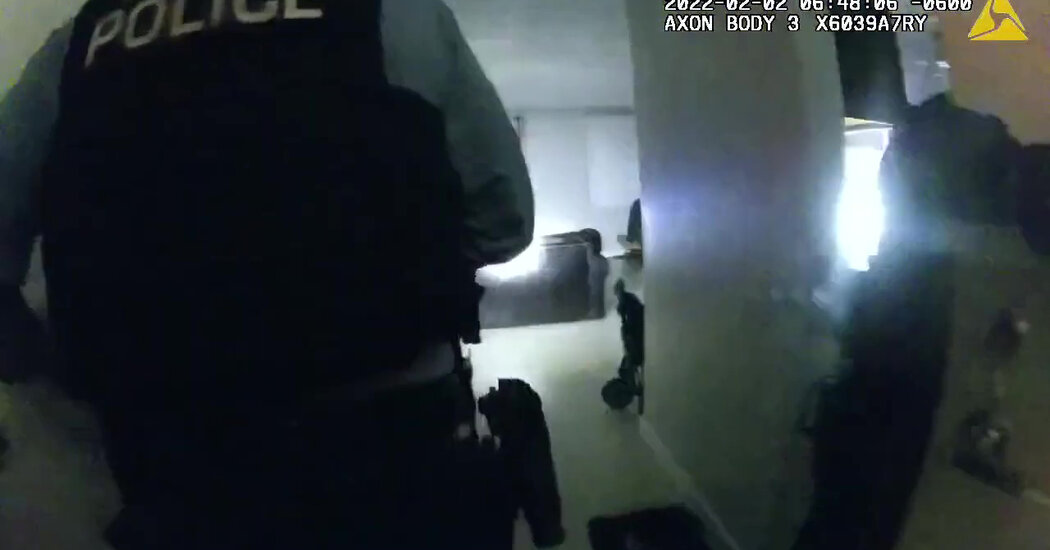 The Minneapolis Police Department on Thursday released body camera footage of its SWAT team fatally shooting a man who was lying on a couch under a blanket when officers entered an apartment to carry out a warrant before 7 a.m.

The man, Amir Locke, 22, had a gun in his hand, the video shows, but it is unclear whether he was aware that police officers had entered the apartment.

The graphic and brief video shows an officer quietly turning a key in the apartment door before several officers file in and begin to yell.

“Hands, hands!” one officer is heard shouting in the video.

“Get on the ground!” another yells.

One officer kicked the back of the couch, jarring Mr. Locke and making a gun visible. The police fired at least three times in response.

In a news release published the day of the shooting, the Police Department said officers had performed emergency aid on Mr. Locke, who died at a nearby hospital.

The SWAT team had been carrying out a warrant on Wednesday morning for the Saint Paul Police Department’s homicide unit. The Minneapolis Police Department released the body camera video and related documents on Thursday night.

“I’m under no illusion that processing this video will be easy,” Amelia Huffman, the city’s interim police chief, said at a news conference. “It won’t be. It shouldn’t be. These are wrenching videos to watch. They’re painful, but it’s necessary.”

Chief Huffman said that officers had a warrant for three locations in the apartment complex, and that Mr. Locke was not named in the original warrant.

Ben Crump, a lawyer representing Mr. Locke’s family, compared the shooting of Mr. Locke, who was Black, to the killing of Breonna Taylor, a Black medical worker who was fatally shot by Louisville police officers in March 2020 during a botched raid on her apartment.

“The tragic killing of Amir Locke shows a pattern of no-knock warrants having deadly consequences for Black Americans,” Mr. Crump said in a statement. “This is yet another example of why we need to put an end to these kinds of search warrants so that one day, Black Americans will be able to sleep safely in their beds at night.”

“Our city has to do better,” Mr. Storms said.

The Minneapolis Police Department has been under scrutiny since Officer Derek Chauvin murdered George Floyd, a 46-year-old Black man, by holding his knee on Mr. Floyd’s neck for more than nine minutes during an arrest in May 2020.

Mr. Floyd’s death generated widespread outrage, and protests across the country that summer called for social justice and police reform. An attempt to change policing in Minneapolis failed in November, when 56 percent of voters rejected a ballot measure that would have replaced the city’s Police Department with a public safety agency.

The release of the footage of Mr. Locke’s death came more quickly than in past cases, and after pressure from Representative Ilhan Omar and state officials.

Ten members of the Minneapolis delegation of the State House of Representatives had called for the footage to be released immediately in a letter to Mayor Jacob Frey and Chief Huffman.

“Minneapolis has a long path before us in establishing a trusting, effective and professional relationship between its Police Department and community,” the representatives wrote. “Increasing transparency around this tragic situation will be an important step in this journey.”

The Police Department said in a statement that one officer fired shots at Mr. Locke, and it released the personnel file of Officer Mark Hanneman. The state’s Bureau of Criminal Apprehension is conducting an investigation into the shooting.

“Our city has been through a lot,” Mayor Frey said. “That’s something that I’ve been grappling with every day, and I know people in our city have as well.”

Want to Understand Mondrian’s Paintings? Try Dancing to Them.

Why Everyone Should Make Brunswick Stew, a Southern Classic