Putin Warns the West and Ukraine, but Keeps His Intentions a Mystery 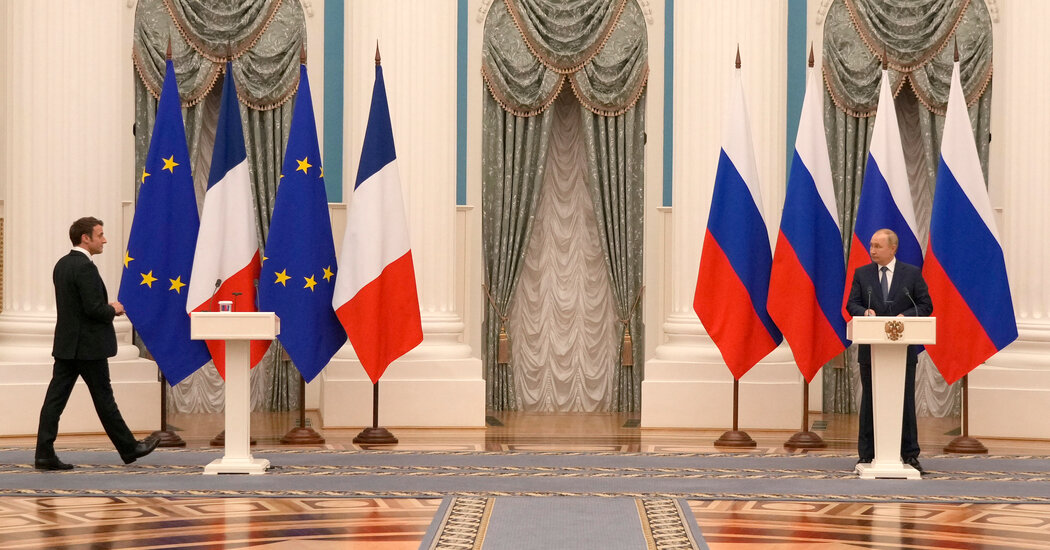 MOSCOW — President Vladimir V. Putin said he was prepared to keep negotiating over Russia’s security demands in Eastern Europe but offered a stark warning over the possibility of a full-scale war between Russia and the West — using a five-hour meeting with his French counterpart on Monday to keep the world guessing about his intentions.

Mr. Putin said that proposals made by President Emmanuel Macron of France in their one-on-one meeting at the Kremlin were “too early to speak about” but could create “a foundation for our further steps.” Mr. Macron, in a joint news conference with Mr. Putin after their hastily scheduled meeting, described the coming days as potentially decisive in heading off what the West fears could be a Russian invasion of Ukraine.

“We are in a situation of extreme tension, a degree of incandescence that Europe has rarely known in the past decades,” Mr. Macron said.

The meeting came as President Biden hosted Chancellor Olaf Scholz of Germany at the White House to coordinate a trans-Atlantic response to a potential attack on Ukraine, underscoring the intense unease in the West touched off by Mr. Putin’s enormous troop buildup around Ukraine’s borders.

Mr. Biden said on Monday that Western countries would take a “united” approach to rising tensions between Russia and Ukraine, and he vowed that a controversial gas pipeline project designed to send gas from Russia to Germany would not go forward in the event of a military invasion.

Mr. Putin appeared to relish the attention — and signaled he was prepared to draw out the mystery around his next moves that has turned the Russian troop buildup into the West’s most urgent crisis. The Russian leader is an avid geopolitical tactician, and Monday’s concurrent talks in Moscow and in Washington showcased his ability to force the West to pay attention to the Kremlin’s longstanding grievances over NATO’s expansion to Russia’s borders.

But whether that attention will be enough to satisfy Mr. Putin is far from clear. Some analysts worry that his engagement in diplomacy in recent weeks is merely buying time for Russia’s military to make final preparations for an invasion.

Mr. Putin said Russia was still working on a new written response in its back-and-forth with NATO and the United States over the security architecture of Eastern Europe, predicting that the “dialogue” would continue even though he said the West had ignored Russia’s principal demands.

He told reporters at the Kremlin that if Ukraine were to join NATO — a scenario that Western officials characterize as a far-off possibility, but one that the Kremlin describes as an existential threat — a wider war would follow.

“Do you want France to go to war with Russia?” Mr. Putin said in answering a French reporter’s question, claiming that a NATO-allied Ukraine would seek to retake Crimea, the Ukrainian peninsula that Russia annexed in 2014. “That’s what will happen!”

Mr. Putin saved his greatest ire for President Volodymyr Zelensky of Ukraine. Asked whether Russia would invade Ukraine, Mr. Putin did not rule out the possibility. He insisted Mr. Zelensky needed to implement the peace plan negotiated in Minsk, Belarus, in 2015 — one that could give the Kremlin a way to influence Ukraine’s foreign-policy decisions.

“You may like it, you may not like it — deal with it, my gorgeous,” Mr. Putin said of Mr. Zelensky, repeating a crude Russian rhyme.

Mr. Macron was scheduled to fly to Kyiv, the Ukrainian capital, on Tuesday to continue his shuttle diplomacy in a meeting with Mr. Zelensky. The French president has emerged as Europe’s main interlocutor with Mr. Putin in the crisis; the two have spoken on the phone five times since December, and Mr. Putin said they would speak again after Mr. Macron’s visit to Ukraine.

The two presidents’ meeting Monday evening was unusual both for its duration and its format — the men spoke one-on-one, without aides in the room. They held a joint news conference that began at about midnight Moscow time.

Mr. Macron said he had coordinated closely with the Western allies, including the United States and Germany. But some supporters of Ukraine’s pro-Western course have criticized him for being too solicitous of Mr. Putin’s demands. Mr. Macron did nothing to assuage those concerns by telling reporters before his meeting with Mr. Putin that a “Finlandization” of Ukraine was “one of the models on the table.”

The term alludes to how Finland, facing the Soviet Union during the Cold War, was able to maintain independence from its powerful neighbor and survive as a democracy on condition of strict neutrality. A “Finlandization” of Ukraine would imply that it would never join NATO and that Russia would exercise considerable influence over its political options.

Mr. Macron did not address the model in the news conference after Monday’s meeting, but he emphasized his belief that Russia’s concerns could be addressed without compromising core Western principles.

“Russia is European,” Mr. Macron said. “Whoever believes in Europe must know how to work with Russia and find the ways and the means to construct the European future among Europeans.”

Mr. Macron said both the West and Russia needed to get over the traumas of the past and build “useful solutions.” He said the “first priority” of his visit was to secure military stability and avert war “in the short term.” Discussions could then continue to build “medium-term solutions.”

“Can NATO solve the whole question of our collective security?” Mr. Macron said. “I don’t believe so.”

The French president offered few details of his ideas, but said they would involve rethinking post-Cold War security arrangements because “there is no security for Europeans if there is not security for Russia.”

Mr. Putin hinted that proposals were on the table that the two leaders were not disclosing publicly.

“A number of his ideas or proposals — which it is probably too early to speak about — I see as rather feasible for creating a foundation for our further steps,” Mr. Putin said.

Russia has amassed a large military force near Ukraine’s eastern, northern and southern borders — about 130,000 troops, U.S. and Ukrainian officials say, in addition to tanks, antiaircraft batteries and other war matériel, and specialized units for supporting combat operations.

Biden administration officials have warned for months that Mr. Putin appeared to be preparing for an invasion, while at the same time acknowledging that his intentions aren’t clear, and that he, himself, may not yet know what he will do. Russian officials insist there is no plan to invade.

“I don’t know that he knows what he is going to do,” Mr. Biden said of the Russian leader in his White House news conference on Monday alongside Mr. Scholz, the German chancellor. Mr. Biden added, “I have been very, very straightforward and blunt with President Putin both on the phone and in person: We will impose the most severe sanctions that have ever been imposed.”

Given the threat of war, Mr. Biden advised American civilians in Ukraine to leave the country, adding that he would “hate to see them get caught in a crossfire if in fact they did invade.”

Despite the insistence that NATO is united, Mr. Scholz has resisted pressure from the United States to take a hard line on Russia, refusing to send arms to Ukraine or to specify what economic sanctions Germany would impose. His vague stance has drawn criticism in Washington from Democrats and Republicans alike, and from some in Germany.

But Mr. Biden batted away any suggestion that Mr. Scholz is seen as an unreliable ally. “There’s no need to win back trust,” he said. “He has the complete trust of the United States.”

“If Russia invades, that means tanks and troops crossing the border of Ukraine again, then there will be no longer a Nord Stream 2,” Mr. Biden said. “We will bring an end to it.”

Yet even then, Mr. Scholz, in response to repeated questioning, would not agree explicitly with Mr. Biden that the project would be halted, saying only, “we are absolutely united.”

Since taking office in December, the chancellor has stayed out of the spotlight, letting Mr. Macron and others take the lead in diplomacy over Ukraine. He has only spoken to Mr. Putin once since taking office, and his meeting Monday with Mr. Biden was his first. But next week, he will visit Kyiv and Moscow. 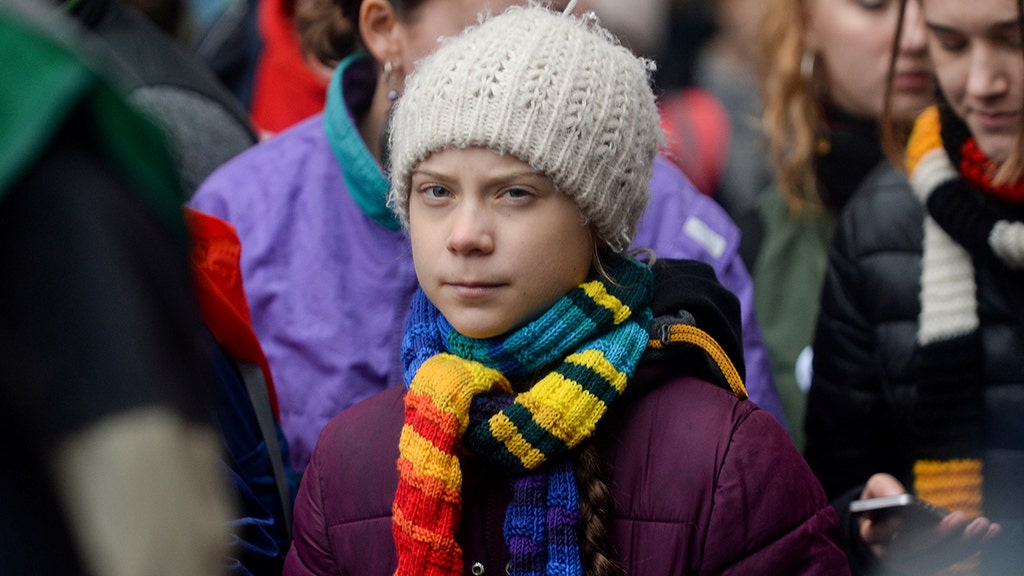 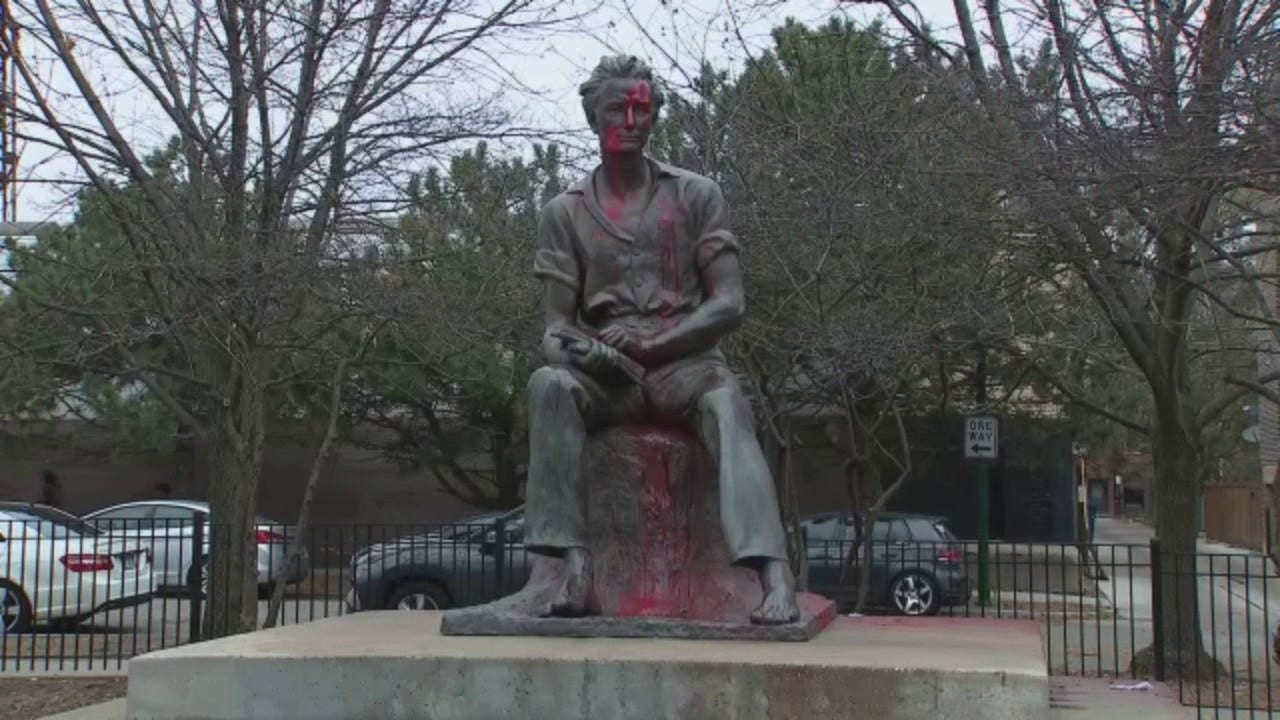 What is alopecia? Jada Pinkett Smith joke sparks interest in the autoimmune disorder

Fourth COVID-19 vaccine approved in Israel for most vulnerable

Brazil’s Neymar Is Out With an Injury After Serbia Match

2024 Watch: Are Trump and Pence no longer on speaking terms?