4 Takeaways From the Sandy Hook Damages Trial of Alex Jones 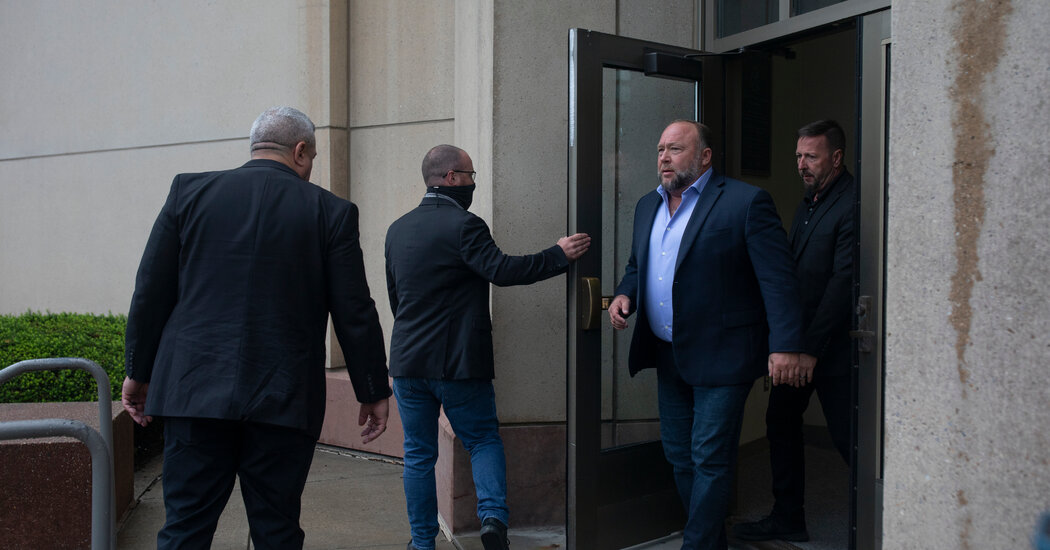 In a mostly slow-burning then suddenly explosive day of testimony, the conspiracy theorist Alex Jones took the stand on Thursday in a trial that will determine how much he and his company must pay in damages to people he defamed after the 2012 shooting at Sandy Hook Elementary School.

Even before Mr. Jones erupted in a rant in the final hour, the day’s proceedings in a Connecticut courtroom had been contentious and frequently interrupted. The stoppages were so common that Judge Barbara Bellis told jurors they were would get their fill of exercise after being asked repeatedly to leave the courtroom so that she could speak privately with the lawyers.

Now in its second week, the trial stems from a case brought by eight families and an F.B.I. agent who responded to the attack in 2012. They sued Mr. Jones after being subjected to years of harassment and threats from people who believed the Infowars fabulist’s claims that the massacre was a hoax and that the relatives of the 20 first graders and six educators who died were “crisis actors.”

Here’s what to know about Thursday’s testimony:

Testimony touching on forbidden topics kept forcing the judge to remove the jury.

Judge Bellis frequently stopped the proceedings to review with Mr. Jones and lawyers for both sides what they could and could not say.

Before Mr. Jones took the stand, the judge had prohibited all parties from discussing several topics, in hopes of avoiding “unpleasantness,” she said. Those hands-off issues included the First Amendment, the amount of the jury’s award in a similar case against Mr. Jones last month, and Mr. Jones’s bankruptcy filing for Infowars’ parent company.

A ban on political statements — put in place in part to prevent Mr. Jones from claiming that the case was a plot by his enemies to silence him — was a frequent sticking point. Mr. Jones cited the prohibition several times to not answer questions, and his lawyer used it to raise objections.

When Chris Mattei, a lawyer for the families, asked Mr. Jones whether his credibility with his audience was the most important attribute, Mr. Jones first declined to answer and then said that his priority was “crushing globalists.”

After Mr. Mattei used those same words, Norm Pattis, Mr. Jones’s lawyer, objected, saying that the response would open the door for the families to inject politics into the trial.

Smoldering gripes and flare-ups preceded an eruption in the last few minutes of testimony.

From the moment he took the stand, Mr. Jones’s testimony was a combative affair.

Mr. Jones at times struggled to follow the judge’s rules, breaking off into forbidden topics and often speaking over his own lawyer’s objections.

Mr. Jones described the trial as “a deep state situation,” though he conceded after some questioning that the Federal Bureau of Investigation wasn’t “officially” suing him. At one point, he mockingly characterized Mr. Mattei’s argument as “conservatives who put up stickers are bad” and “we all need to go to prison.”

During a sidebar with the judge, Mr. Jones’s lawyer alluded to his hostile frame of mind: “He thinks this trial reflects the efforts of tyrants to silence him including George Soros, Hillary Clinton.”

Then, shortly after Mr. Mattei said he would need only about 20 minutes to finish his questioning, the session became chaotic.

Mr. Mattei played a video of a tearful statement from a father of one of the murdered students and said that Mr. Jones had put a “target” on him and other parents. Mr. Jones erupted, saying that “liberals” like Mr. Mattei are “unbelievable, you switch on emotions on and off when you want, you’re ambulance chasing.”

Mr. Mattei chided Mr. Jones, reminding him that people in the courtroom had lost family members.

“Is this a struggle session? Are we in China? I’ve already said I’m sorry, and I’m done saying I’m sorry,” Mr. Jones responded, as his lawyer shouted objections.

Finally, Judge Bellis rebuked Mr. Jones. “This is not a press conference, this is not your show,” she said. “You have to respect the process.”

After the jury was excused for the day, Judge Bellis threatened Mr. Jones and his lawyer with a contempt hearing if the outbursts recurred in the trial.

Video clips countered Mr. Jones’s attempts tried to distance himself from past comments and old collaborators.

Throughout the day, Mr. Jones said could not recall specific things he had said about the Sandy Hook shooting and demurred when asked about former associates. Mr. Mattei countered with footage from the “Alex Jones Show,” on which he spread lies about the 2012 shooting and mocked the lawsuits against him.

Mr. Jones said he could not recall accusing parents of “fake crying” before Mr. Mattei played footage of him doing just that and calling the shooting as “phony as a $3 bill.”

He also denied knowing Matthew Mills, who interrupted a Super Bowl postgame interview in 2014 and later disrupted a memorial run planned by the family of a Sandy Hook victim. A video was then played of Mr. Jones interviewing Mr. Mills, praising him as a “stand-up guy” and offering to hire him.

Mr. Jones could not remember whether he commended, on air, people who plastered Infowars stickers on a street sign in front of the courthouse. Mr. Mattei then played a clip from a recent episode of the host telling those people “we commend you.”

And he said he could not recollect details concerning Dan Bidondi, a freelance cameraman who worked for Infowars and made several trips to Newtown, home to the Sandy Hook school, to confront residents and survivors. According to one recording played in court, Mr. Jones described sending the cameraman on assignment as akin to “releasing the Kraken.”

Mr. Jones, who earlier in his testimony had said he had a “pretty good memory,” answered one question about Mr. Bidondi by saying, “I don’t remember what happened two weeks ago on my show.”

Mr. Mattei explored how Mr. Jones made money, including by advertising diet supplements and other products.

It’s a crucial element of the case: Last year, Mr. Jones was found liable for violating the Connecticut Unfair Trade Practices Act by selling products against false claims about Sandy Hook. In Connecticut, there is no cap on punitive damages awarded in cases involving that law.

Mr. Mattei suggested that Mr. Jones — whose Infowars site promoted the trial against him as a “Kangaroo Court” — was using the trial as a marketing opportunity to his followers.

A Hollywood Hangout Where the Food Is Actually the Point

Spotify Is Removing Neil Young Songs After He Complains of ‘Misinformation’