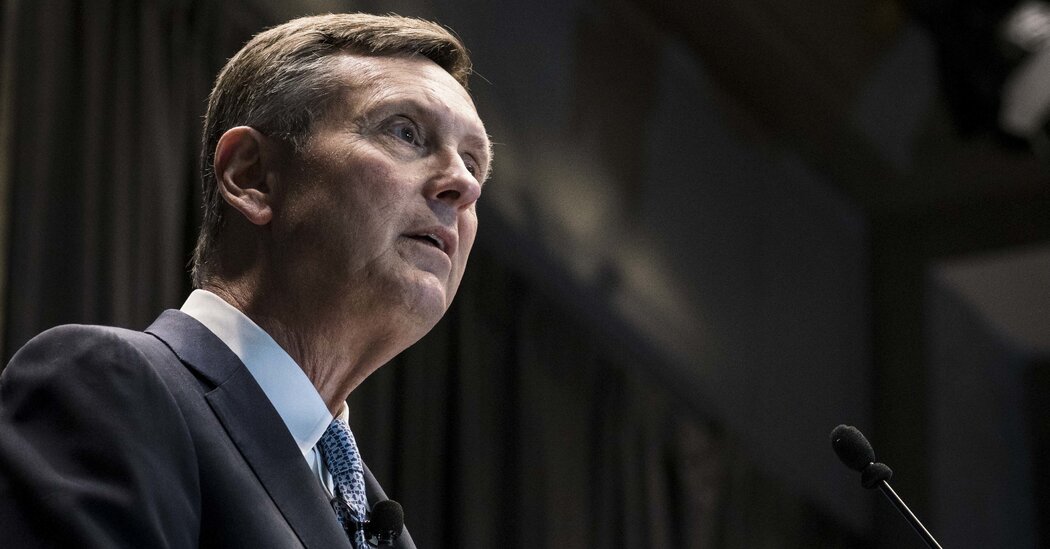 Richard H. Clarida, the departing vice chair of the Federal Reserve, failed to initially disclose the extent of a financial transaction he made in early 2020 as the Fed was preparing to swoop in and rescue markets amid the unfolding pandemic.

Mr. Clarida previously came under fire for buying shares on Feb. 27 in an investment fund that holds stocks — one day before the Fed chair, Jerome H. Powell, announced that the central bank stood ready to help the economy as the pandemic set in. The transaction drew an outcry from lawmakers and watchdog groups because it put Mr. Clarida in a position to benefit as the Fed restored market confidence.

Mr. Clarida’s recently amended financial disclosure showed that the vice chair sold that same stock fund on Feb. 24, at a moment when financial markets were plunging amid fears of the virus.

The Fed initially described the Feb. 27 transaction as a previously planned move by Mr. Clarida away from bonds and into stocks, the type of “rebalancing” investors often do when they want to take on more risk and earn higher returns over time. But the rapid move out of stocks and then back in makes it look less like a planned, long-term financial maneuver and more like a response to market conditions.

“It undermines the claim that this was portfolio rebalancing,” said Peter Conti-Brown, a Fed historian at the University of Pennsylvania. “This is deeply problematic.”

The Fed did not provide further explanation of Mr. Clarida’s trade when asked why he had sold and bought in quick succession. Asked if the Fed stood by previous indications that the move was a rebalancing, a spokesperson did not comment.

The correction to the disclosures was released late last month and came after Mr. Clarida noticed “inadvertent errors” in his initial filings, a Fed spokesperson said, noting that the holdings were in broad funds (as opposed to investing in individual stocks). Mr. Clarida did not comment for this article.

The extent of Mr. Clarida’s transaction is the latest development in a monthslong trading scandal that has embroiled top Fed officials and prompted high-profile departures at the usually staid central bank.

That’s because Fed officials were actively rescuing a broad swath of markets in 2020: In March and April, they slashed rates to zero, bought mortgage-tied and government bonds in mass quantities, and rolled out rescue programs for corporate and municipal debt. Continuing to trade in affected securities for their own portfolios throughout the year could have given them room to profit from their privileged knowledge. At a minimum, it created an appearance problem, one that Mr. Powell himself has acknowledged.

Mr. Kaplan resigned in September, citing the scandal; Mr. Rosengren resigned simultaneously, citing health issues. Mr. Clarida’s term ends at the close of this month, which it was scheduled to do before news of the scandal broke.

Mr. Clarida’s trades, which Bloomberg reported earlier, also raised eyebrows among lawmakers, including Senator Elizabeth Warren of Massachusetts, who has demanded a Securities and Exchange Commission investigation into Fed officials’ 2020 trading. But many ethics experts had seen the transaction as more benign, if poorly timed, because it happened in a broad-based index and the Fed had said it was part of a planned and longer-term investment strategy.

The new disclosure casts doubt on that explanation, given that Mr. Clarida sold out of stocks just days before moving back into them.

“It’s peculiar,” said Norman Eisen, an ethics official in the Obama White House who said he probably would not have approved such a trade. “It’s fair to ask — in what respect does this constitute a rebalancing?”

Ms. Warren reacted to the news on Twitter, calling the situation “deeply troubling” and saying that stock trading should be banned among federal officials.

It is unclear whether Mr. Clarida benefited financially from the trade, but it was most likely a lucrative move. By selling the stock fund as its value began to plummet and buying it back days later when the price per share was lower, Mr. Clarida would have ended up holding more shares, assuming he reinvested all of the money that he had withdrawn. The financial disclosures put both transactions in a range of $1 million to $5 million.

The sale-and-purchase move would have made money within a few days, as stock markets and the fund in question increased in value after Mr. Powell’s announcement. The investment would have then lost money as stocks sank again amid the deepening pandemic crisis.

But the fund’s value recovered after the Fed’s extensive interventions in markets. Assuming they were held, the holdings would ultimately have appreciated in value and turned a bigger profit than they would have had Mr. Clarida merely held the original investment without selling or buying.

The Fed was aware of the reputational risk around trading as the pandemic kicked into high gear — the Board of Governors’ ethics office sent an email in late March 2020 encouraging officials to hold off on personal trades — but notable transactions happened in late February and again as early as May in spite of that, its officials’ disclosures suggest.

Mr. Powell has acknowledged the optics and ethics problem the trading created, saying that “no one is happy” to “have these questions raised.” He and his colleagues moved quickly to overhaul the Fed’s trading-related rules after the revelations, releasing new and stricter ethics standards that will force officials to trade less rapidly while banning many types of investment.

The individuals in question also faced censure. They are under independent investigation to see if their transactions were legal and consistent with internal central bank rules. The S.E.C. declined to comment on whether it has opened or will open an investigation into Mr. Clarida’s trades and his colleagues’, as Ms. Warren had requested.

While the officials who came under the most scrutiny for their trades have left or will leave soon, the new disclosure could cause problems for the Fed’s remaining leaders — including Mr. Powell, whom President Biden recently renominated to a second term as chair.

Mr. Powell will appear before the Senate Banking Committee next week for his confirmation hearing, as will Lael Brainard, a Fed governor, whom Mr. Biden nominated to replace Mr. Clarida as vice chair.

Both could face sticky questions about why a Fed culture permissive of trading at activist moments was, until recently, allowed to prevail. Mr. Powell led the organization, while Ms. Brainard headed the committee in charge of reserve bank oversight.

The trading scandal has also resurfaced longstanding concerns about whether the Fed is too cozy with Wall Street, and whether its officials are working for the public or to profit from their own actions.

If he is asked about the scandal, Mr. Powell is likely to point to the tougher ethics guidelines that the Fed unveiled in October. Mr. Clarida’s apparently rapid transaction would most likely have been trickier under the new rules, which require officials to give 45 days’ notice before buying an asset, and which prevent trading during tumultuous market periods.

The updated disclosures do show that Mr. Clarida was “in compliance with applicable laws and regulations governing conflicts of interest,” based on the Fed ethics officer’s assessment. But that alone is unlikely to prevent scrutiny.

Regardless of legality, “the public would be concerned if it turned out that he bought shares of the fund before a major announcement by the Federal Reserve potentially affecting the value of his shares,” Walter Shaub, a former government ethics official now at the Project on Government Oversight, said in an email.

Mr. Shaub said more information was needed to know if the trade was problematic, including whether Mr. Clarida knew the Feb. 28 announcement was coming — and when he knew that.

The Fed previously told Bloomberg that Mr. Clarida was not yet involved in deliberations about the coronavirus response at the time of the trade.

But Mr. Clarida was in close touch with his colleagues throughout that week. He had a call with a board member and a regional Fed president on Feb. 26, his calendars show. That is the way the Fed typically lists meetings of the Fed chair, vice chair and New York Fed president — the Fed’s so-called troika, which sets the agenda for central bank policy — on its largely anonymized official calendars.

Mr. Conti-Brown said that regardless of how much Mr. Clarida knew about his colleagues’ plans, the February trades were an issue that the Fed needed to explain in detail.

“Richard Clarida is a decision maker,” he said. “The deliberations that happen within his brain are what matter here.”

‘The Batman’ and Matt Reeves: Emerging From the Shadow of Other Caped Crusaders