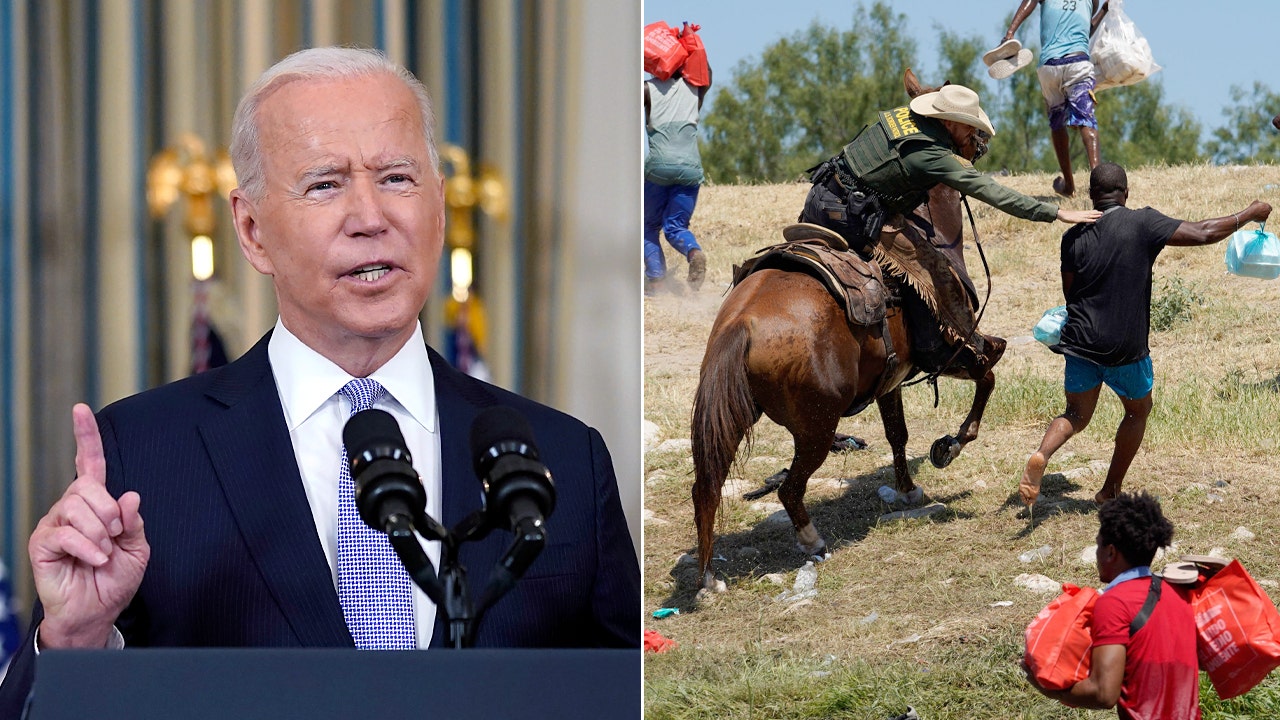 It has been a year since President Biden lashed out at Border Patrol agents, falsely accusing them of having “strapped” migrants in a clash at the border in Del Rio and promising they would “pay” –— statements that Biden has still neither corrected nor apologized for.

On Sept. 24, 2021, Biden spoke out days after an incident amid the Haitian migrant crisis in Del Rio. Border Patrol agents had been dealing with a surge of over 10,000 migrants who had gathered under the nearby bridge.

Photographs emerged that some Democrats and media commentators had incorrectly interpreted as showing agents using whips or whipping migrants who were trying to cross the river. In fact, the agents were using split reins to control their horses.

However, the narrative was already in motion, and quickly the images drew condemnation from top congressional Democrats and top Biden officials, including Vice President Kamala Harris and Homeland Security Secretary Alejandro Mayorkas, who had initially backed the agents but subsequently announced an investigation.

Five days after the initial incident, and after the whipping claims had been debunked, Biden was asked about the incident.

The comments drew immediate outrage from Border Patrol agents, who castigated Biden for not only adding fuel to the false whipping narrative, but also for placing political pressure on the investigators, who they believed were forced to find something on the agents in order to punish them.

“Those investigators, they are executive branch employees,” Brandon Judd, head of the National Border Patrol Council told Fox News Digital in an interview on Saturday. “Their boss — and when I say their boss, the president of United States, their boss — had already condemned those agents. They had to find something wrong.”

In July, the CBP Commissioner Chris Magnus announced that the agency’s Office of Professional Responsibility had found “no evidence” agents struck anyone with their reins — and that agents were not carrying whips.

But while the core complaint against the agents was found to be false, the agency’s Office of Professional Responsibility found multiple infractions that were a far cry from Biden’s claim that migrants were whipped. An agent was found to have used “denigrating and offensive” language against migrants regarding national origin and gender, and was accused of having maneuvered a horse around a child in an “unsafe manner.”

The report also faulted agents for using an “unmoderated” tactical radio, for having insufficient training for the situation and for an “unnecessary use of force” to drive the migrants back. Now the agents have an opportunity to appeal before a final decision is made.

A year after the remarks, Judd said the impact of Biden’s comments were still being felt by the men and women of the Border Patrol, given that their colleagues had been falsely accused of crimes by the head of the executive branch.

“We’re still feeling that impact today,” he told Fox News Digital on Saturday. “Border Patrol agents are very hesitant to do their jobs, knowing that they could be accused by the most powerful man in the world of a crime.”

Biden has not walked back his remarks in the year since he made them. The White House did not respond to a request for comment from Fox News Digital.

Judd was not surprised that Biden had not walked them back, given the political implications.

As for the agents themselves, Judd said he is confident that they will be cleared entirely when they go through the process of responding to the accusations.

“Their attorneys are working through this entire process. And once it comes to completion, I’m confident those agents will be exonerated,” he said.

Adam Shaw is a politics reporter for Fox News Digital, with a focus on immigration. He can be reached at [email protected] or on Twitter: @AdamShawNY

Fentanyl seizures at southern border jumped over 200% in July

Top Senate Democratic candidates refuse to say whether men can get pregnant, or define the word ‘woman’

Of Barbecues and Men: A Summer Storm Brews Over Virility in France