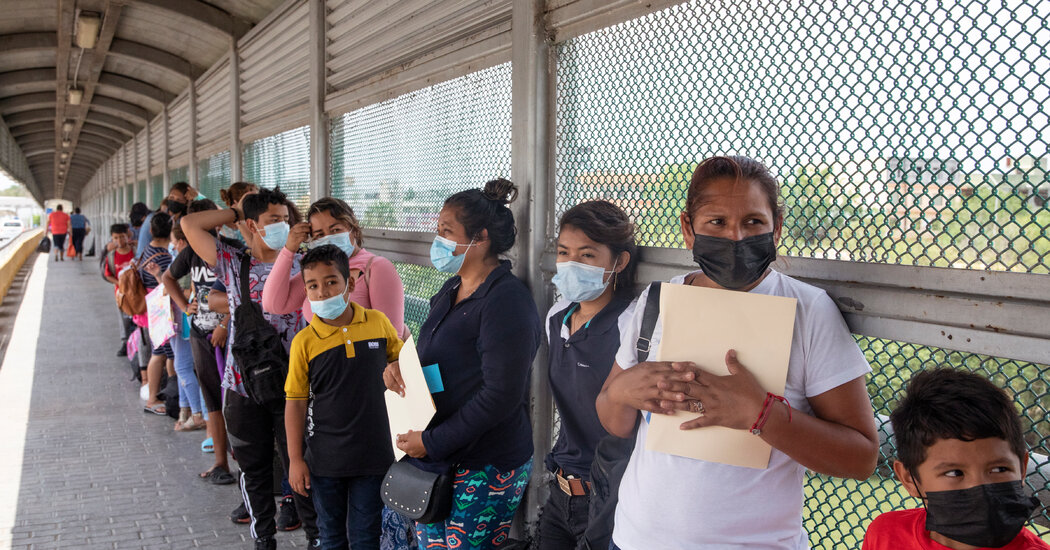 LOS ANGELES — President Biden and the leaders of several Latin American countries were expected on Friday to unveil a new agreement to confront migration, including specific numerical pledges to allow more people fleeing desperate political and economic situations to cross their borders.

The agreement, called the Los Angeles Declaration on Migration and Protection, commits the United States to taking 20,000 refugees from Latin America during the next two years, a threefold increase, according to White House officials. Mr. Biden also pledges to increase the number of seasonal worker visas from Central America and Haiti by 11,500.

In return, other countries would step up their efforts to allow entry of migrants before they reach the United States. Mexico will accept as many as 20,000 more temporary workers and start a new program for up to 20,000 people from Guatemala who are looking for work.

Canada will pledge to accept 4,000 refugees from the Americas by 2028. Spain will promise to double the number of migrant workers it accepts. Costa Rica, Colombia and Brazil all will increase their efforts to deal with an overwhelming flow of refugees fleeing political instability in Venezuela.

Taken together, the promises are a testimony to the magnitude of the problem of migration across the Western Hemisphere, where poverty, political instability, natural disasters and violence have sent millions of people fleeing their homes in search of work, shelter and safety. As part of the deal, the United States also committed to a new effort to crack down on human smuggling; in the last two months, the Department of Homeland Security has already quickly sent more than 1,300 people to the region, officials said.

It is an attempt by Mr. Biden to confront repeated surges of migrants at the U.S. border, by casting them as a problem for the entire region, not just the United States. But the effort has been undermined by the boycott of the summit by Mexico and Northern Triangle countries. And the document underscores the limits of cooperation on one of the toughest subjects for the countries of the region.

Several key countries declined to sign the agreement or make commitments, including El Salvador and Honduras, two countries in the Northern Triangle part of Central America that contribute heavily to the flow of migration to the United States and elsewhere.

The countries that are planning to sign have pledged to accept a small fraction of the number of people leaving their homes in search of a life elsewhere. About six million displaced Venezuelans have fled the economic and political turmoil of their home country in the last five years, to Colombia, Peru and Ecuador, among other countries. Central Americans facing gang violence and climate change have sought fresh starts in Mexico as well as the United States. Hundreds of thousands of Nicaraguans targeted by a crackdown on dissent have moved to Costa Rica, where about 10 percent of the population consists of refugees.

The pledges from the countries in the declaration — if they materialize at all — will play out over years, not days or weeks. And the effects will almost certainly not be felt in the short term, when the United States and other countries are dealing with immediate crises as their borders.

A senior administration official told reporters Thursday night that Mr. Biden never expected all of the countries in the region to sign on to the agreement, but the official did not directly address the ones who refused.

“There’s certain countries that, I think, feel the pain and recognize the value in coming together, working on responsibility sharing, and advancing — exploring new tools that we can employ to better bring the situation under control,” said the official, who requested anonymity to discuss the agreement before it was to be made public.

“We were never seeking to have all countries in the Western Hemisphere,” the official said.

The issue of migration has been a fraught one for Mr. Biden almost since the day he took office. Within months, a surge of families and unaccompanied children trying to enter the United States overwhelmed border facilities and raised questions about the administration’s efforts to ease restrictions that had been put in place by its predecessor.

Faced with an increased flow of migrants and legal challenges, Mr. Biden has left in place some of the harshest measures started by former President Donald J. Trump, including a public health restriction on entry and a policy requiring many asylum seekers to wait in squalid camps in Mexico while their cases are heard.

That has prompted fierce criticism from some of Mr. Biden’s most fervent allies, who say the president should deliver on the promises he made during the presidential campaign to end the Trump-era programs.

But the president also continues to be the target of attacks from Republicans, who accuse him of being too lenient at the border and of encouraging the migrants by being more welcoming than Mr. Trump was.

W.N.B.A. Playoffs Preview: What to Know as the Sky Look to Repeat