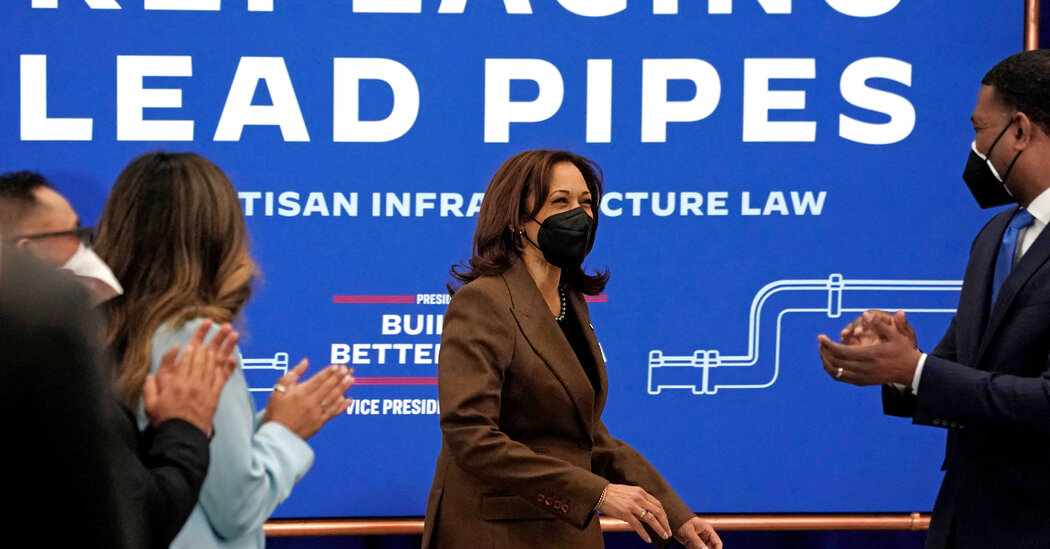 NEWARK — Schkeema Troutman had just started describing the many difficulties of trying to raise a family in a city with high levels of lead in its drinking water when Vice President Kamala Harris noticed the mother of three was not being heard.

Ms. Troutman’s microphone was not working, limiting her voice to nearly a whisper at a round-table discussion here on Friday. So Ms. Harris stood and handed her microphone over to amplify Ms. Troutman’s story.

“You have so many different things to worry about,” Ms. Troutman said of owning a home near lead service lines, and the dozens of people in the room could hear her.

“That’s the thing,” Ms. Harris responded. “You should not have to worry about that.”

The brief exchange highlighted the vice president’s aim in traveling to Newark, which the administration views as a model of how a community can overcome water contamination after years of neglect. But for Ms. Harris and the White House, the trip was also an opportunity to amplify issues directly affecting underserved communities, particularly amid rising anxiety from civil rights advocates and grass-roots organizations after seeing President Biden’s sprawling proposals centered on racial equity slimmed during negotiations with a divided Congress.

The White House has made removing every lead pipe within 10 years in the United States a centerpiece of its plan to address racial disparities and environmental issues in the wake of water contamination crises in recent years from Newark to Flint, Mich. As many as 10 million lead service lines still deliver water to schools, offices, homes and day care centers throughout the country.

Ms. Harris said Newark, which removed roughly 23,000 lead pipes in nearly three years, could provide a road map for communities across the United States. She described the issue as not just as a “public health crisis,” but also one fueling racial disparities.

Ms. Harris used the event to highlight $15 billion in funding to remove lead pipes that is part of the $1 trillion bipartisan infrastructure package that Mr. Biden signed in November.

Mr. Biden initially proposed $45 billion in the infrastructure bill for lead removal. Another $10 billion is tucked in a sprawling social-safety net and climate package torpedoed by congressional gridlock. Other administration proposals that supporters celebrated for promoting racial equity have since been cut or removed entirely as Democrats try to salvage the plan, including investments in affordable housing, clean energy provisions, home health care work and reconnecting neighborhoods divided by highways.

Jill Biden, the first lady, confirmed to educators this week that Democrats had cut a proposal to provide two free years of community college from the legislation, adding to the frustrations of civil rights leaders who say the administration is not prioritizing legislation aimed at helping Black and Latino communities.

“Nationwide, frustration is building given the failure to cancel student debt, expand voting rights and pass police reform,” said Derrick Johnson, the president of the N.A.A.C.P. “For the most part, this administration is saying all the right words but there are far too few outcomes to back those up.”

Along with providing the vice president an opportunity to counter those complaints, the trip also gave her a chance to break out of Washington, amid concerns that she has lost political momentum and that the White House has sunk her with a portfolio that could produce few political victories.

“One of the tragedies of the first year, and it’s just been a year, has been that she’s been a prisoner of Washington, D.C., and she’s been a prisoner of the press and she’s not out in these streets,” Bakari Sellers, a former lawmaker in South Carolina and one of Ms. Harris’s top surrogates during her presidential campaign, told The Breakfast Club, a New York-based radio show, last month. “I want her in these places actually talking to real people.”

The Infrastructure Bill at a Glance

Transportation. The proposal would see tens of billions of dollars in new federal spending going to roads, bridges and transportation programs. Amtrak would see its biggest infusion of money since its inception, and funds would be allocated to programs intended to provide safe commutes for pedestrians.

Climate. Funding would be provided to better prepare the country to face global warming. The Forest Service would get billions of dollars to reduce the effects of wildfires. The bill includes $73 billion to modernize the nation’s electricity grid to allow it to carry renewable energy.

Resources for underserved communities. A new $2 billion grant program is expected to expand transportation projects in rural areas. The bill would also increase support for Native American communities, allotting $216 million to the Bureau of Indian Affairs for climate-resilience and adaptation efforts.

Local officials and residents in Newark on Friday commended Ms. Harris for highlighting lead exposure, which can damage the brain and kidneys and interfere with red blood cells that carry oxygen to all parts of the body. The neurotoxin poses a particular danger to children, whose nervous systems are still developing.

But even as she won plaudits for her appearance on Friday, her promotion of a solution whose future in Congress is partly uncertain risked creating another future political backlash for the vice president.

“This is just what communities need: to be heard,” said Yvette Jordan, a teacher and the chairwoman of the Newark Education Workers Caucus, one of the plaintiffs who last year agreed to settle a federal lawsuit accusing Newark and state officials of violating safe water laws. “But this is a first step, not a last step.”

City officials in Newark were not always eager to talk about the issue. Mayor Ras Baraka, who sat with Ms. Harris on Friday, was long accused of neglecting the problem, even mailing a brochure to residents claiming that “the quality of water meets all federal and state standards,” despite evidence of alarming levels of lead.

But after intense scrutiny from community organizers and the federal government, the city began to acknowledge the severity of the issue. Newark accomplished its turnaround last year before the passage of the infrastructure bill; Mr. Baraka received $120 million in bonds from the county’s improvement authority.

If the Biden administration wants to see the progress replicated across the country, they will need the funding outlined in the sprawling social safety net package, known as Build Back Better, according to Erik D. Olson, the senior strategic director for health at the Natural Resources Defense Council, an advocacy group. Even that might not be enough; removing every lead pipe in the nation could cost $60 billion, according to one industry estimate.

Mr. Olson’s organization has called for the Environmental Protection Agency to strengthen federal regulations that would require localities to remove lead pipes and recently sent letter to the agency demanding the administration prioritize investments to underserved communities.

Spotify Bet Big on Joe Rogan. It Got More Than It Counted On.

What Are the Best Forever Boots?