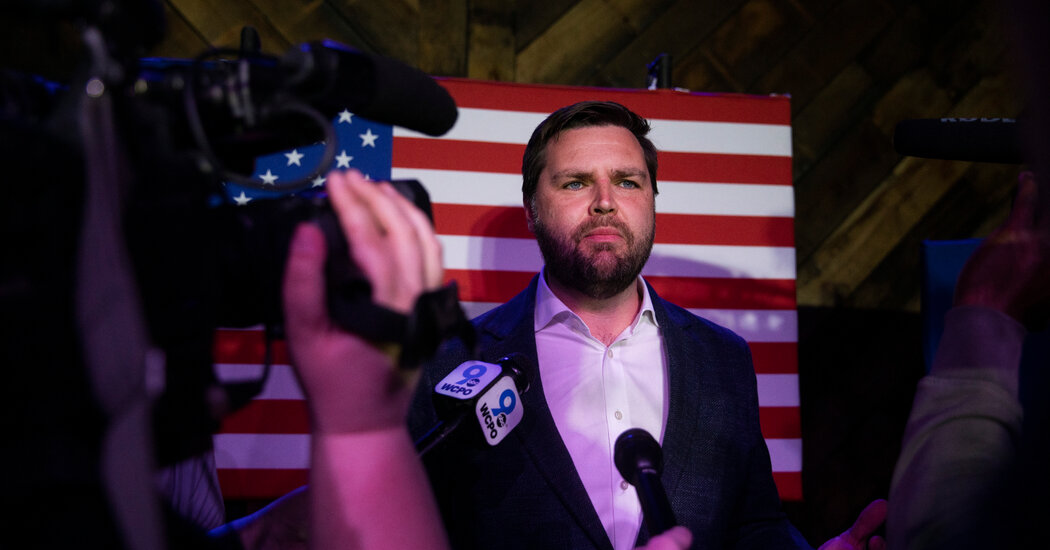 Before the 2016 election, J.D. Vance called Donald J. Trump “cultural heroin” and a demagogue who was “leading the white working class to a very dark place.”

On Tuesday, Mr. Vance’s triumph in a crowded Republican field for Senate in Ohio was thanks largely to an endorsement, late in the race, from the former president he once denounced.

The conversion of Mr. Vance, an author and venture capitalist, from Trump skeptic to full-on Trump ally might fill a second memoir, a sequel to his best-selling “Hillbilly Elegy,” Mr. Vance’s story of growing up poor in Kentucky and Ohio. When that book was published in 2016, it was devoured by the “coastal elites” he now rails against as a means for them to decode white working-class support for Mr. Trump.

Mr. Vance’s book pointed inward to explain the woes of his community: He blamed a personal “lack of agency” for drug abuse, welfare dependency and chaotic lives. But as a politician, he has pointed the finger outward, at external enemies, just as Mr. Trump did.

On the campaign trail, Mr. Vance blamed corporations for shipping jobs to China and accused liberals of opening borders to cheap labor and opioid traffickers. The intimate voice of “Hillbilly Elegy” yielded to a darker tone and language. He castigated “idiots” in Washington and “scumbags” in the news media.

His critics, including Republican rivals in Ohio, said he had turned himself inside-out to mimic Mr. Trump’s bellicosity in pursuit of votes. Opponents spent millions on attack ads to remind voters that Mr. Vance had once called himself “a Never Trump guy” and had said some voters backed Mr. Trump “for racist reasons.”

Mr. Vance, on a slog across Ohio he called the “No B.S. Town Hall Tour,” explained to modest crowds that he had undergone a political evolution, recognizing that Mr. Trump was right on issue after issue.

“I was like, ‘Man, you know, when Trump says the elites are fundamentally corrupt, they don’t care about the country that has made them who they are, he was actually telling the truth,’” he told a conservative podcaster last year.

Mr. Vance, 37, grew up in Middletown, Ohio, where a grandfather had moved from Kentucky for a steel mill job. In the years after J.D. Vance was born in 1984, the city hollowed out as blue-collar jobs left, opioids arrived, marriages dissolved and much of the industrial Midwest became “a hub of misery” for the white working class, he wrote in his memoir.

Mr. Vance’s mother, Bev, struggled with drug addiction. He was raised largely by his maternal grandparents, particularly the grandmother he called Mamaw, who “loved the Lord,” “loved the F-word” and owned 19 handguns, he said on the campaign trail.

Out of high school, Mr. Vance enlisted in the Marines and served in Iraq as a public affairs officer. He returned home a man in a hurry, sailing through Ohio State in under two years.

At Yale, he met a fellow student he would marry, Usha Chilukuri, who went on to clerk for an appeals court judge, Brett M. Kavanaugh. Democrats’ fierce opposition to Mr. Trump’s nomination of Judge Kavanaugh to the Supreme Court in 2018 appeared to be a turning point in Mr. Vance’s political transformation.

“Trump’s popularity in the Vance household went up substantially during the Kavanaugh fight,” he recalled in 2019.

Mr. Vance went to work as a venture capitalist in San Francisco for Peter Thiel, a billionaire founder of PayPal, whom he had heard speak at Yale. Mr. Thiel, a Silicon Valley conservative, also influenced Mr. Vance’s politics, especially his opposition to China and to immigration.

When Mr. Vance moved his family, which now includes three children, back to Ohio, he raised money from Mr. Thiel for a venture capital fund of his own — and followed the Thiel tradition by naming the business, Narya Capital, with a “Lord of the Rings” reference.

As a candidate, Mr. Vance had struggled to translate celebrity as an author into broad recognition and support from the Republican base. He was perpetually running behind his rivals in polling, and Mr. Thiel’s millions were nearly gone.

But all that turned around with Mr. Trump’s endorsement on April 15. Most of the Republican field had aggressively auditioned for the former president’s seal of approval. Mr. Vance first pitched Mr. Trump at a meeting at Mar-a-Lago brokered by Mr. Thiel. Donald Trump Jr. and the Fox News host Tucker Carlson also lobbied for Mr. Vance.

“J.D. Vance may have said some not so great things about me in the past,” Mr. Trump said in announcing his choice, “but he gets it now, and I have seen that in spades.”

After El Paso shooting, Trump pushed again on gun control. His aides talked him out of it.

With a Neutral Stance on Ukraine, Viktor Orban Pulled in Voters

‘My Dead Dad’ Review: Learning the Ropes, Thanks to an Inheritance