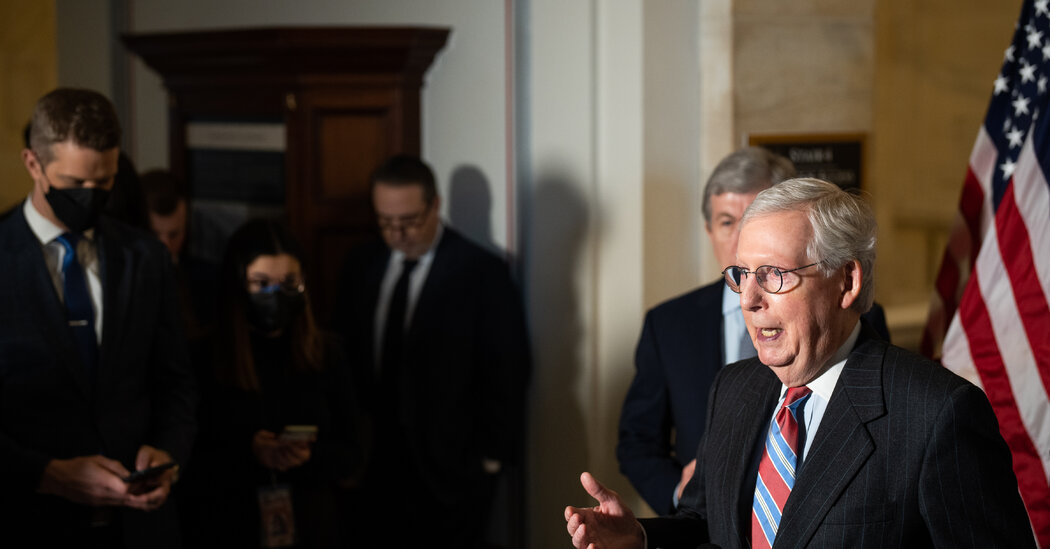 WASHINGTON — Senator Mitch McConnell, the minority leader, pushed back hard on Tuesday against the Republican Party’s censure of Representatives Liz Cheney and Adam Kinzinger and its characterization of the Jan. 6 riot as “legitimate political discourse,” saying the riot was a “violent insurrection.”

The remarks from Mr. McConnell, the normally taciturn Kentucky Republican, added to a small but forceful chorus of G.O.P. lawmakers who have decried the action that the Republican National Committee took on Friday, when it officially rebuked Ms. Cheney and Mr. Kinzinger for participating in the House investigation of the Jan. 6 attack, accusing them of “persecution of ordinary citizens engaged in legitimate political discourse.”

Mr. McConnell repudiated that description, saying of the events of Jan. 6, 2021: “We saw it happen. It was a violent insurrection for the purpose of trying to prevent the peaceful transfer of power after a legitimately certified election, from one administration to the next. That’s what it was.”

He made the remarks to reporters outside Senate Republicans’ closed-door weekly lunch, where his aides had signaled in advance that he was to make an important statement on the R.N.C.’s action.

Mr. McConnell’s comments were a rebuke of how far the party has gone to deny the reality of the violence that unfolded during the bloody assault on the Capitol, sending lawmakers from both parties running for safety. More than 150 people were injured in the attack, which led to several deaths, and nearly 750 individuals have been criminally charged in connection with it.

In the days since the Republican National Committee passed the resolution at its winter meeting in Salt Lake City, a handful of Republicans have criticized the move as everything from a political distraction to a shame on the party. Mr. McConnell, who orchestrated the impeachment acquittal of former President Donald J. Trump and blocked the naming of an independent, bipartisan commission to examine the attack, was among the most blunt in his defense of the only Republicans serving on the committee that rose from that proposal’s ashes.

“Traditionally, the view of the national party committees is that we support all members of our party, regardless of their positions on some issues,” he said. “The issue is whether or not the R.N.C. should be sort of singling out members of our party who may have different views of the majority. That’s not the job of the R.N.C.”

Representative Kevin McCarthy of California, the minority leader, by contrast, defended the resolution on Tuesday, telling a CNN reporter that it was meant to condemn the House committee’s targeting of conservatives who were nowhere near Washington on Jan. 6 and had nothing to do with either the attack or the broader effort to overturn the 2020 election.

Mr. McCarthy, who has refused to speak with the House inquiry about his conversations with Mr. Trump during and around the Jan. 6 attack, has been consulting with William A. Burck, a prominent Washington lawyer, about how to navigate the investigation as he braces for a possible subpoena.

The censure, pushed by allies of former President Donald J. Trump, was just over one page long, but it has sent Republicans into turmoil, exposing the party’s fissures while underscoring how its fealty to Mr. Trump continues to define everything it does. It has disrupted efforts by congressional Republicans to turn the page from Jan. 6 and focus instead on what they see as the failings of President Biden and the Democratic Party in an election year.

At a news conference on Tuesday, House Republicans wanted to spend their time blaming Mr. Biden for a worsening fentanyl crisis, but virtually every question was about the party’s resolution.

“Republicans have been very clear, we condemn the violence on Jan. 6. We also condemn the violence in 2020 as violent criminals attacked federal buildings including parts of Washington, D.C.,” said Representative Elise Stefanik of New York, the House Republican Conference chairwoman, equating racial justice protests with the deadly assault on the Capitol. She added that “we believe the Jan. 6 commission is political theater about punishing partisan opponents.”

Some Republicans defended the resolution by noting that it encapsulated the party’s view of what had happened on Jan. 6.

“Whatever you think about the R.N.C. vote, it reflects the view of most Republican voters,” said Senator Josh Hawley, Republican of Missouri. “In my state, it’s not helpful to have a bunch of D.C. Republicans commenting on the R.N.C.”

But others were clearly appalled. Senator Mitt Romney, Republican of Utah, who castigated the resolution as shameful on Friday before the party vote, told reporters on Monday that he had exchanged texts about it with the Republican National Committee chairwoman, Ronna McDaniel, who is also his niece.

“Anything that my party does that comes across as being stupid is not going to help us,” he said.

Inside the Republican National Committee, the resolution has led to an intensive round of finger-pointing. Several members said they never intended to suggest that those who rioted on Jan. 6, 2021, were “engaged in legitimate political discourse,” even as they conceded the censure resolution’s language said just that.

The resolution, which was drafted by David Bossie, a longtime conservative operative aligned with Mr. Trump, and Frank Eathorne, the Wyoming Republican Party chairman, started out as an effort to expel Ms. Cheney and Mr. Kinzinger from the House Republican Conference. But committee members decided against calling for such a move, and instead settled on a censure.

An early draft condemned the two representatives for participating in “a Democrat-led persecution of ordinary citizens engaged in nonviolent and legal political discourse,” but “nonviolent and legal” was ultimately taken out and replaced with “legitimate,” according to a person familiar with the drafting who attributed the revision to a routine editing decision.

A G.O.P. resolution. The Republican National Committee officially declared the Jan. 6 attack on the Capitol “legitimate political discourse,” while censuring Representatives Liz Cheney and Adam Kinzinger for participating in the inquiry into the episode. Mitch McConnell, the Senate minority leader, subsequently spoke against the resolution.

The first trial. Prosecutors have provided a revealing glimpse of their strategy for the first trial stemming from the attack on the Capitol, unveiling an inventory of the extensive evidence they intend to introduce.

A high-profile repudiation. At a gathering of conservatives in Florida, former Vice President Mike Pence offered his most forceful rebuke of Donald J. Trump, saying the former president was “wrong” in claiming that Mr. Pence had the authority to overturn the 2020 election.

The result was a resolution that called the Jan. 6 inquiry “persecution of ordinary citizens engaged in legitimate political discourse,” which passed by a voice vote but angered some committee members who later said they felt blindsided.

William Palatucci, a committee member from New Jersey, said he had attended the resolution committee meeting but was kept in the dark about the exact wording until he received an emailed copy at 1 a.m. on the morning of the vote.

“The authors of the resolution and the leadership at the R.N.C. have nobody to blame but themselves,” he said, adding that he interpreted the resolution to excuse “anyone who participated in the riot on Jan. 6.”

Ms. McDaniel has rejected that reading of the resolution, and on Tuesday a spokeswoman said: “The R.N.C. has repeatedly condemned all acts of political violence and lawlessness, including what occurred on Jan. 6. Unfortunately, this committee has gone well beyond the scope of the events of that day, and is why the R.N.C. overwhelmingly passed a resolution censuring Liz Cheney and Adam Kinzinger.”

Several members of the committee assert that when the censure mentioned “ordinary citizens” and “legitimate political discourse,” it was referring to people like Kathy Berden, a Republican committee member from Michigan who put herself on a fake slate of electors for Mr. Trump. Joseph R. Biden Jr. won the state by more than 154,000 votes, or nearly 3 percentage points.

Republican National Committee members portray Ms. Berden as an innocent victim of an overzealous investigation, noting that she is elderly and a widow. The Jan. 6 committee subpoenaed Ms. Berden last month as part of an effort to find out who orchestrated the drive to put forward false electors in several states that Mr. Biden won, a potential crime.

Over time, as Mr. Trump has strengthened his grip on the party, more Republicans have become convinced that he was not culpable for the violence. The nonpartisan Pew Research Center, in new polling released on Tuesday, found that fewer Americans, 43 percent, now say Mr. Trump bears a lot of responsibility for the attack than a year ago, when 52 percent said he did. About 32 percent of adults now say Mr. Trump bears no responsibility at all for the mayhem, up from 24 percent. Only 10 percent of Republicans and Republican-leaning independents say the former president bears a lot of responsibility, down from 18 percent a year ago.

On Capitol Hill, there is little appetite among Republicans for talking about the riot. House Republicans emerged from a closed-door meeting on Tuesday morning with a clear message: The party should focus on ensuring that Ms. Cheney, of Wyoming, does not win re-election in November. (Mr. Kinzinger, of Illinois, has already announced his retirement.)

“People want them kicked out,” said Representative Marjorie Taylor Greene, a Georgia Republican who led an effort last year to expel the two. But, she added, “it’d be really ridiculous to kick them out of the conference, but not work hard to make sure Liz Cheney is defeated.”

At the same time, some far-right Republicans appeared intent on portraying themselves as the victims of a Democratic drive to persecute them for their political views. On Tuesday, Representative Troy Nehls, Republican of Texas, took to Twitter to accuse the Capitol Police of secretly entering his office and “maliciously investigating me in an attempt to destroy me and my character” because he had criticized the Jan. 6 investigation.

The chief of the Capitol Police, J. Thomas Manger, said an officer had noticed Mr. Nehls’s office door was left “wide open” the weekend before Thanksgiving and, following procedures, investigated to make sure nothing had been stolen, before closing the door and locking it.

Arizona Officers on Leave After Watching Man Struggle and Drown

In Kenyan Elections, the People Decide First. Then Come the Judges.