The Man at the Center of Arizona’s Primary 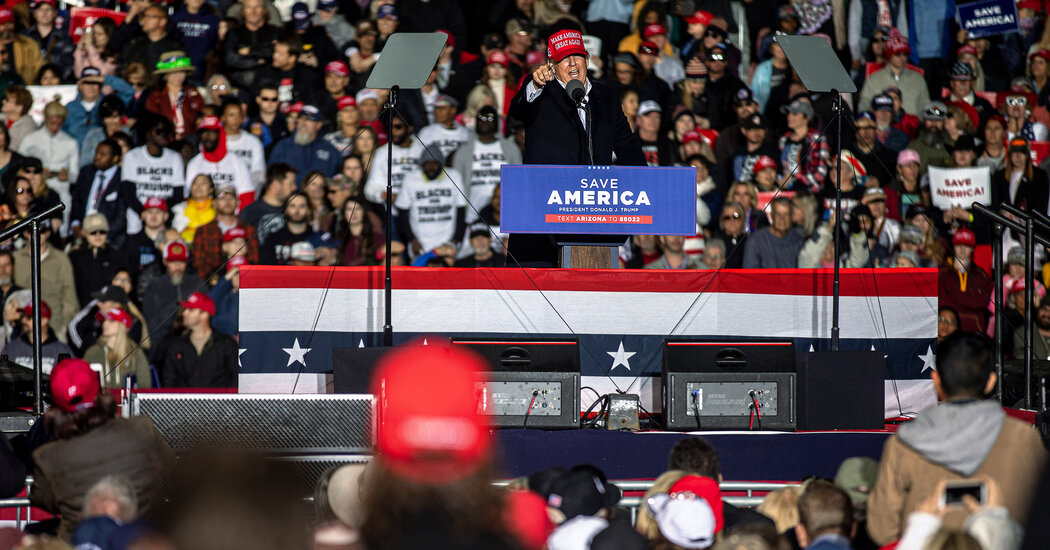 Senator Kyrsten Sinema has received so much attention recently that you might have forgotten that she’s not the Arizona Democrat up for re-election in 2022.

That would be Senator Mark Kelly. As a freshman Democrat in a state that President Biden won by less than a percentage point in 2020, he’s one of four vulnerable incumbents whom Republicans are targeting as they seek to regain the majority in the U.S. Senate.

If Republicans fail to knock off Kelly, a popular former astronaut with piles of campaign cash, it’ll be for one main reason, party strategists and pollsters tell us: A primary so consumed with winning Donald Trump’s blessing that the Republican Party sets itself up to lose the general election.

“With the current electoral environment shaping up to be very pro-Republican, the only potential issue is that a hard-right candidate comes out of the primary and ends up losing in what should be a gimme Republican year,” said Mike Noble, an Arizona-based pollster.

The obvious choice for a challenger to Kelly might have been Doug Ducey, Arizona’s Republican governor. He managed to win re-election in a brutal year for Republicans and is not allowed to run for a third term. But Ducey has steadfastly maintained he’s not interested in the Senate.

That leaves a number of lesser-known Republicans to vie for the nomination. The best way to stand out? Obtaining the endorsement of Trump, which means making remarks or taking positions that could haunt them in November.

First, there’s Attorney General Mark Brnovich, who’s worked in Arizona government for the last decade. But he faces intense pressure from Trump and from the Republican grass-roots to find fraud in his investigation of the 2020 election. At an Arizona rally earlier this month, Trump referred to his baseless claims that he actually won the state and told the crowd that he was “anxiously waiting” to see whether Brnovich would agree with him, and that they’d soon find out if the attorney general is a “good man.”

Brnovich, apparently undeterred, posted on Twitter a photo of himself with Trump.

Trump reserved a warmer reception for Blake Masters, calling him “a really terrific guy” at the rally. Masters — a venture capitalist backed by Peter Thiel, a billionaire tech mogul who’s close to Trump — has said that he believes Trump won in 2020 and that the country is being run by “psychopaths.”

Then there’s Jim Lamon, a businessman whose campaign put $1 million behind a TV ad cheering “Let’s Go Brandon,” a far-right slogan that translates to an expletive directed at Biden. Lamon also helped facilitate Republicans’ post-mortem review of the 2020 election results in the state’s most populous county.

All of these efforts to win the former president’s support could backfire in the fall if Democrats are able to anchor the eventual nominee to Trump.

“Yes, it’s a big benefit and help during the primary due to Trump’s current influence over the electorate,” Noble said. “However, it is absolutely a weakness when they move into the all-important general election.”

It’s ‘the Republicans’ to lose’

Before we go any further, let’s make one thing clear: Given the national environment, Republicans should have a natural advantage in a state that Biden won so narrowly.

It’s not just that the party in the White House tends to struggle in the first midterm election of a president’s term, or that the president’s approval ratings are hovering in the low 40s. It’s also that Biden inherited a pandemic and all the economic and social fallout that came with it. And that Arizona was ruby red only a few short years ago, suggesting that Kelly’s three-point margin in 2020 could be easy enough to erase.

“It’s absolutely the Republicans’ to lose,” Brian Seitchik, an Arizona-based Republican consultant, said of the race.

Republicans are confident that whoever becomes their nominee will enter the race against Kelly in a strong position to win.

“​​Voters and persuadable swing voters will be inclined to want to vote for someone who’s going to be a check and a balance on the Biden administration,” said Daniel Scarpinato, a former chief of staff to Ducey.

Arizona elected two Democratic senators during Trump’s term and ultimately voted to oust him in 2020. And even in a national environment that could lift Republicans to the majority, they could still find ways to lose.

Scarpinato said he hasn’t seen candidates engage in behavior that would “tear the party apart or put people in a position where they’re perceived as being unelectable.”

But he cautioned that Republicans can’t become so preoccupied with fighting one another in the primary — which is not until August — that they delay their attacks against Kelly.

One Republican national strategist involved in Senate races told us that the top concern for many in his party is that the eventual nominee drains all their resources on the primary, leaving them cash-strapped against Kelly, who ended last year with nearly $20 million in his campaign account.

And while others noted that while Republican-aligned outside groups such as the Club for Growth could make up any gaps in spending, money is likely one reason that many Republicans keep hoping Ducey changes his mind and decides to run, Noble said.

Ducey was re-elected in 2018 even as Democrats won a Senate seat in Arizona for the first time in decades. He’s already proven he can put together a top-tier statewide campaign operation. But Ducey has said publicly and privately that he’s not running, and it’s easy to see why: He’d have to get through a Republican primary and general election without the support of Trump, who blames him for losing the state in 2020. Just a few weeks ago, Trump reiterated in a statement that Ducey would never have his “endorsement or the support of MAGA Nation!”

One of the great unknowns in the 2022 election is the effect of the president’s approval rating. If it stays in the low 40s, Kelly could be ousted no matter how skilled a campaign he runs, or how bumbling an opponent he faces.

“He has to carry around Joe Biden like a sack of potatoes wherever he goes,” said Stan Barnes, a Republican strategist based in Phoenix.

A lighthearted moment accidentally illuminated some important dynamics on the Supreme Court — more consequential, perhaps, than the retirement of Justice Stephen Breyer.

In oral arguments last week in a case about whether Boston can stop a private group from flying a Christian flag in front of its City Hall, a lawyer for the plaintiffs was addressing Clarence Thomas, a deeply conservative associate justice who joined the court in 1991.

“Chief —” the lawyer, Mathew Staver, began, before correcting himself and continuing, “Justice Thomas.”

The little-noticed hiccup came after a flood of recent commentary and reporting on Thomas’s growing influence after years on the margins of the court.

Last year, Jill Abramson, the former executive editor of The New York Times, observed in an opinion essay that “what is remarkable is the extent to which the Supreme Court, with the addition of three Donald Trump nominees who create a 6-to-3 conservative majority, seems to be reshaping itself in Justice Thomas’s image.”

This is the one thing that pundits of opposite political leanings seem to agree on: Liberals have lamented Thomas’s role as “the new chief justice,” while conservatives, including the influential Wall Street Journal editorial page, have hailed “the Thomas court.”

It’s not the first time someone has made the same error. In March of last year, when a lawyer in another case mistakenly called Thomas “Mr. Chief Justice,” the actual chief justice — John Roberts — joked, “There’s no opening.”

Your Office, Some Other Guy’s Politics