Trump Had Role in Weighing Proposals to Seize Voting Machines 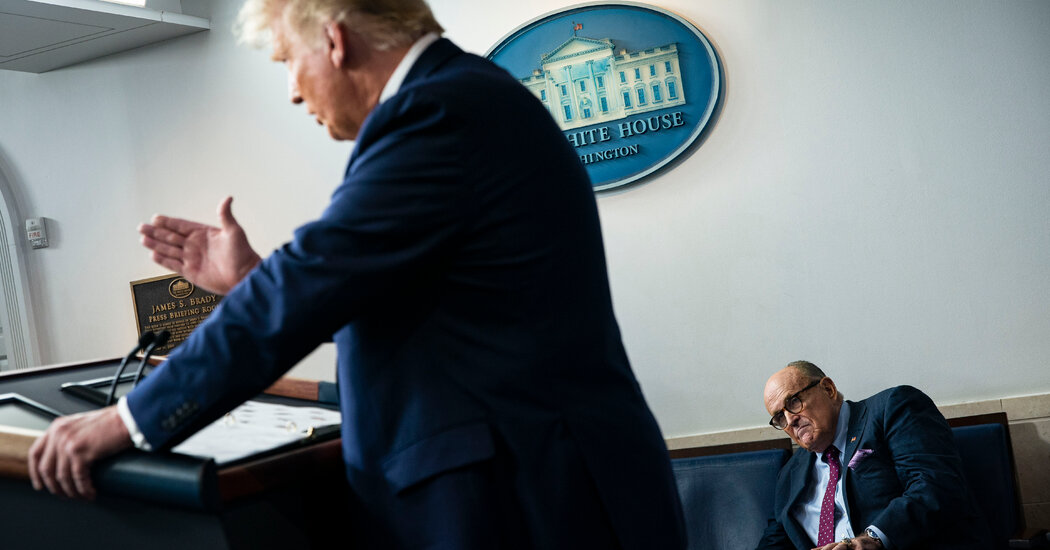 It was only after several early options were exhausted that Mr. Waldron pitched the idea of using other parts of the federal government to seize the machines to both Mr. Giuliani and members of the Trump legal team, and to Mr. Flynn and his own associates, including Ms. Powell and Patrick Byrne, a wealthy business executive who funded many of the efforts to challenge the election.

Mr. Waldron, who owns a bar and distillery outside Austin, Texas, was previously best known for having circulated a 38-page PowerPoint presentation to lawmakers and White House aides that was filled with extreme plans to overturn the election.

Mr. Giuliani was vehemently opposed to the idea of the military taking part in the seizure of machines, according to two people familiar with the matter. The conflict between him and his legal team, and Mr. Flynn, Ms. Powell and Mr. Byrne came to a dramatic head on Dec. 18, 2020, during a meeting with Mr. Trump in the Oval Office.

At the meeting, Mr. Flynn and Ms. Powell presented Mr. Trump with a copy of the draft executive order authorizing the military to oversee the seizure of machines. After reading it, Mr. Trump summoned Mr. Giuliani to the Oval Office, according to one person familiar with the matter. When Mr. Giuliani read the draft order, he told Mr. Trump that the military could be used only if there was clear-cut evidence of foreign interference in the election.

Ms. Powell, who had spent the past month filing lawsuits claiming that China and other countries had hacked into voting machines, said she had such evidence, the person said. But Mr. Giuliani was adamant that the military should not be mobilized, the person said, and Mr. Trump ultimately heeded his advice.

Shortly after the Oval Office meeting, Mr. Waldron amended the draft executive order, suggesting that if the Defense Department could not oversee the seizure of machines then the Department of Homeland Security could, the person said.

Around that time, Mr. Trump asked Mr. Giuliani to call Kenneth T. Cuccinelli II, the acting deputy secretary at the Department of Homeland Security, to ask about the viability of the proposal, according to two people familiar with the matter. Mr. Cuccinelli said that homeland security officials could not take part in the plan.

Claude Rutault, Master of the Painted Word, Is Dead at 80