Trump’s Words, and Deeds, Reveal Depths of His Drive to Retain Power 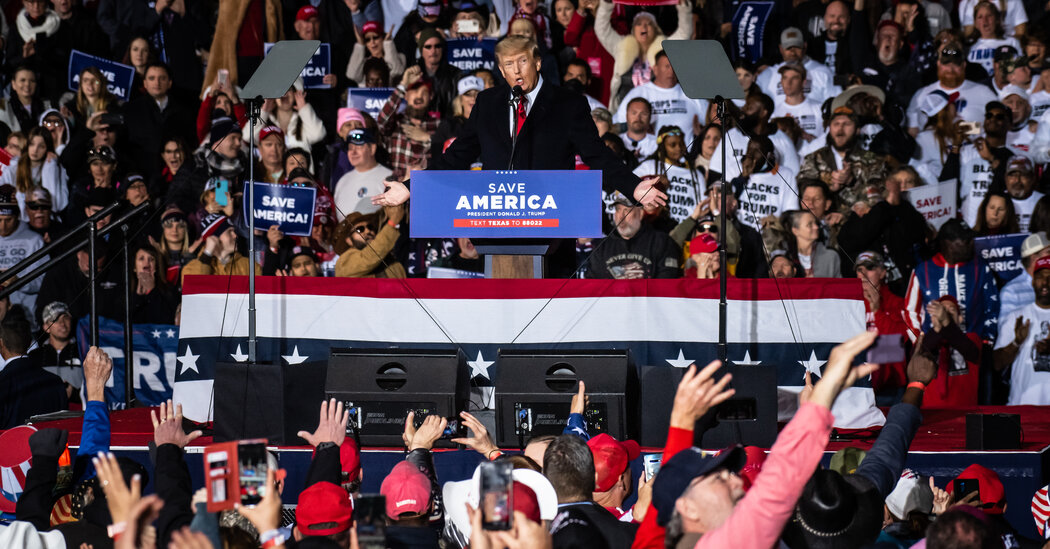 A series of new remarks by Donald J. Trump about the aftermath of the 2020 election and new disclosures about his actions in trying to forestall its result — including discussing the use of the national security apparatus to seize voting machines — have stripped away any pretense that the events of Jan. 6, 2021, were anything but the culmination of the former president’s single-minded pursuit of retaining power.

Mr. Trump said on Sunday that Mike Pence “could have overturned the election,” acknowledging for the first time that the aim of the pressure campaign he focused on his vice president had simply been to change the election’s result, not just to buy time to root out supposed fraud, as he had long insisted. Those efforts ended at the Capitol with a violent riot of Trump supporters demanding that Mr. Pence block the Electoral College vote.

Over the weekend, Mr. Trump also dangled, for the first time, that he could issue pardons to anyone facing charges for participating in the Jan. 6 attack if he is elected president again — the latest example of a yearslong flirtation with political violence.

And, ignoring what happened the last time he encouraged a mass demonstration, Mr. Trump urged his supporters to gather “in the biggest protests we have ever had” if prosecutors in New York and Atlanta moved further against him. The prosecutor examining Mr. Trump’s efforts to overturn the election in Georgia immediately asked the F.B.I. to conduct a “risk assessment” of her building’s security.

The events of Jan. 6 played out so publicly and so brutally — the instigating speech by Mr. Trump, the flag-waving march to the Capitol, the violent clashes with the police, the defiling of the seat of democracy — and have since been so extensively re-examined that at times it can seem as if there were little more to be discovered about what led up to that day.

Then, The New York Times reported this week that Mr. Trump himself had directed his lawyer, Rudolph W. Giuliani, to ask the Department of Homeland Security whether it could legally seize voting machines in three key swing states. Mr. Trump also raised, in an Oval Office meeting with Attorney General William P. Barr, the possibility of the Justice Department’s seizing the machines.

But historians say the episodes and Mr. Trump’s new comments acknowledging his determination to stay in power — and his effective embrace of the Jan. 6 rioters at the Capitol, who he said must be treated “fairly” — have newly underscored the fragility of the nation’s democratic systems.

Jeffrey Engel, director of the Center for Presidential History at Southern Methodist University, said voters were understandably desensitized, if not numb, after a year in which Mr. Trump methodically sought to undermine faith in the electoral process.

“I actually think the American public is dramatically underplaying how significant and dangerous this is,” he said, “because we cannot process the basic truth of what we are learning about President Trump’s efforts — which is we’ve never had a president before who fundamentally placed his own personal interests above the nation’s.”

Already, Mr. Trump is gearing up for a potential third run for the White House, announcing on Monday that his political accounts had banked $122 million — a show of financial force as some polls show his support softening among Republicans.

In the year since he left office, he has systematically tried to remove those who were obstacles to him in 2020 and its aftermath: seeking to drive out of office the Republicans who voted to impeach him on charges of inciting the riot, recruiting challengers to Republican officials who certified the 2020 vote, and backing new candidates to serve as election administrators and legislators in key states.

On Tuesday, Mr. Trump appeared in a new television ad attacking Gov. Brian Kemp, Republican of Georgia, with whom he has feuded for refusing to overturn the result there. He also hosted a fund-raiser at Mar-a-Lago for Joe Kent, a Republican in Washington who is challenging one of the House Republicans who voted to impeach him.

And on Wednesday, Tudor Dixon, a Republican candidate for governor of Michigan, where Mr. Trump lost and sought to undermine the results, is holding a Mar-a-Lago fund-raiser of her own.

Meanwhile, congressional investigators with the Democratic-led Jan. 6 commission are busily examining what took place inside the White House in the weeks and months leading up to that day, interviewing senior administration officials and issuing subpoenas. A central focus of their inquiry is the attempt by Mr. Trump’s legal team and advisers to persuade him to use his presidential powers to deploy national security agencies to seize voting machines.

It has been known for months that some advisers, including the lawyer Sidney Powell and Mr. Trump’s former national security adviser, Michael T. Flynn, pitched Mr. Trump in December 2020 on using the military to seize the machines in order to check the validity of their tallies. But new accounts suggest that Mr. Trump was more receptive to this — even taking steps to act on some ideas — than previously understood.

“Donald Trump’s a constitutional wrecking ball,” said Representative Jake Auchincloss, a freshman Democrat from Massachusetts, who saw the mob overrun his workplace in his first days on Capitol Hill. “To borrow a term from the financial markets, that’s priced in. So his revelations and his rhetoric are important. They are a clear and present threat to our democracy. But they’re also priced in.”

The real question is for congressional Republicans, Mr. Auchincloss said: “They know as well as we do what threat he poses to our constitutional order. Are they going to stand up to him?”

Mr. Trump’s discussion of pardons and of Mr. Pence’s potential to overturn the election, as well as his encouragement of another mass rally — against law-enforcement officials — were met mostly with a shrug among Capitol Hill Republicans.

“I’m just glad that there were people in the right places and that the system worked — I mean, obviously, people who had positions of responsibility held their ground even when being asked to do things that they knew they shouldn’t do,” said Senator John Thune of South Dakota, the No. 2 Republican, who has occasionally clashed with Mr. Trump. “Things may have been bent a little bit, but they didn’t break.”

Key Figures in the Jan. 6 Inquiry

Ivanka Trump. The daughter of the former president, who served as one of his senior advisers, has been asked to cooperate after the panel said it had gathered evidence that she had implored her father to call off the violence as his supporters stormed the Capitol.

Mark Meadows. Mr. Trump’s chief of staff, who initially provided the panel with a trove of documents that showed the extent of his role in the efforts to overturn the election, is now refusing to cooperate. The House voted to recommend holding Mr. Meadows in criminal contempt of Congress.

Marc Short. Mr. Pence’s chief of staff, who has firsthand knowledge of Mr. Trump’s pressure campaign on the vice president to throw out the election results, testified before the panel under subpoena. He is the most senior person around Mr. Pence who is known to have cooperated.

Scott Perry and Jim Jordan. The Republican representatives of Pennsylvania and Ohio are among a group of G.O.P. congressmen who were deeply involved in efforts to overturn the election. Both Mr. Perry and Mr. Jordan have refused to cooperate with the panel.

Big Tech firms. The panel has criticized Alphabet, Meta, Reddit and Twitter for allowing extremism to spread on their platforms and saying they have failed to cooperate adequately with the inquiry. The committee has issued subpoenas to all four companies.

Roger Stone and Alex Jones. The panel’s interest in the political operative and the conspiracy theorist indicate that investigators are intent on learning the details of the planning and financing of rallies that drew Mr. Trump’s supporters to Washington based on his lies of a stolen election.

Phil Waldron. The retired Army colonel has been under scrutiny since a 38-page PowerPoint document he circulated on Capitol Hill was turned over to the panel by Mr. Meadows. The document contained extreme plans to overturn the election.

John Eastman. The lawyer has been the subject of intense scrutiny since writing a memo that laid out how Mr. Trump could stay in power. Mr. Eastman was present at a meeting of Trump allies at the Willard Hotel that has become a prime focus of the panel.

Senator Kevin Cramer, Republican of North Dakota, said that “at the end of the day, as contentious as Jan. 6 was, as confrontational as that whole process was, the process worked.”

A rare voice of dissent was Representative Liz Cheney of Wyoming, one of the few outspoken Republican critics of Mr. Trump and the top Republican on the Jan. 6 committee.

“He has acknowledged he was trying to overturn the election,” Ms. Cheney wrote on Twitter on Tuesday. “He is making clear he would do this all again if given the chance.”

Long before the Capitol riot, Mr. Trump spoke approvingly of political violence among his supporters.

In 2015, he said of a protester at one of his rallies, “Maybe he should have been roughed up.” In 2016, he floated the idea of paying the legal fees of supporters who turned violent.

While president, he said on Twitter, “When the looting starts, the shooting starts,” in a warning to demonstrators after the police killing of George Floyd. And in the first 2020 presidential debate, Mr. Trump famously declined to condemn white supremacist groups like the Proud Boys for their role in creating violence.

“Stand back and stand by,” Mr. Trump had urged the Proud Boys. Members of the far-fight group cheered for what they took as encouragement from the commander in chief.

“He is using his supporters as his own kind of militia,” said Douglas Brinkley, a professor of history at Rice University. Mr. Trump, he said, was essentially telling his followers to “be ready because this could end up being the new civil war.”

“He is just wanting to have people angry and ready to take up arms if need be,” Mr. Brinkley added. “And that feeds into the fantasy-scape of every militia group in the country.”

The district attorney in Fulton County, Ga., Fani T. Willis, took Mr. Trump’s rally comments seriously, she wrote to the F.B.I., because “his statements were undoubtedly watched by millions.” She added that she had already taken extra security precautions because of people “unhappy with our commitment to fulfill our duties.”

Ms. Willis vowed to press ahead: “My staff and I will not be influenced or intimidated by anyone.”

Oren Segal, vice president of the Center on Extremism at the Anti-Defamation League, said that far-right groups had reacted eagerly — and sometimes threateningly — to similar calls by Mr. Trump in the past.

In April 2020, for example, Mr. Trump tweeted “Liberate Michigan!” — a reference to early coronavirus restrictions put in place in the state. Within a month, heavily-armed protesters gathered at the statehouse in Lansing to denounce the governor’s stay-at-home order.

“Extremists, in Trump’s case, found a champion for their cause in the highest office,” Mr. Segal said, because Mr. Trump mirrored their sense of grievance, anger and rage. “He sounds like them,” he added. “That’s why they react.”

Planned Parenthood of Utah has sued to block the state’s abortion ban.