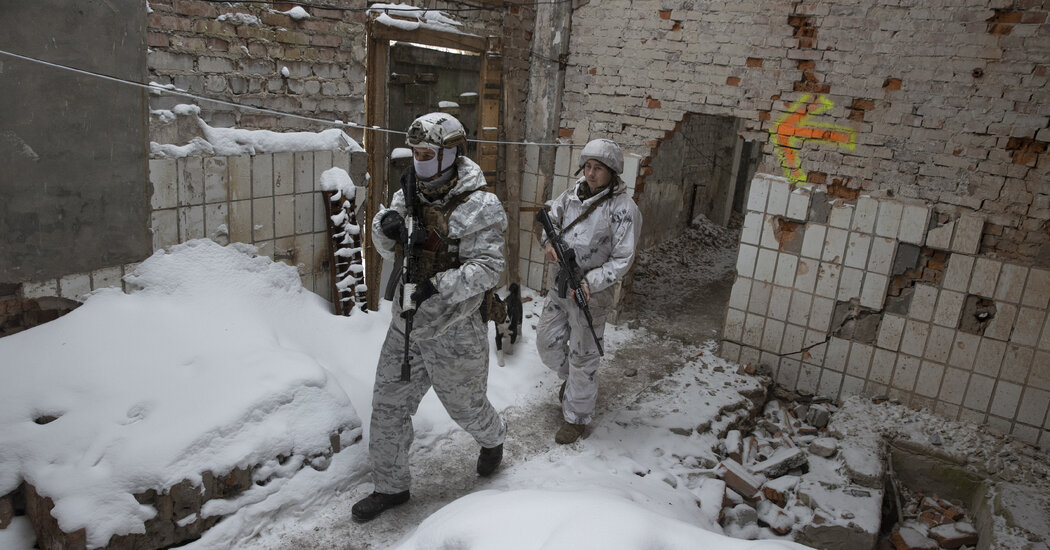 WASHINGTON — The State Department said on Sunday that it had ordered family members of U.S. Embassy personnel in Kyiv, Ukraine, to leave the country amid increasing concerns about a possible Russian invasion.

The embassy will remain open for now, senior State Department officials said in a briefing with reporters, but some diplomats have been authorized to depart as well.

The State Department also cited the possibility of Russian military action in keeping its travel risk advisory at Level 4, the highest category, urging U.S. citizens to not travel to Ukraine. The advisory was raised to that level last month because of concerns about Covid-19.

The State Department officials said that the moves were made “out of an abundance of caution,” but that the United States would “not be in a position” to evacuate U.S. citizens should Russia invade Ukraine. Russia has stationed about 100,000 troops near the border of the neighboring country.

“U.S. citizens in Ukraine should be aware that Russian military action anywhere in Ukraine would severely impact the U.S. Embassy’s ability to provide consular services, including assistance to U.S. citizens in departing Ukraine,” the State Department said in its travel advisory.

Visa processing and most other consular services at the embassy will continue for the time being, officials said.

The embassy is one of the larger American missions in Europe. It has about 900 employees total, the vast majority of them Ukrainians, some of whom have been with the mission since it opened three decades ago.

The State Department officials said that they did not know how many American citizens are currently in Ukraine.

Officials said they would review in 30 days whether family members had left and whether authorized personnel had chosen to leave. They urged all other Americans in Ukraine to use commercial and private transportation options to leave as soon as possible.

The U.S. Embassy in neighboring Minsk, Belarus, issued a new alert on Sunday night also urging Americans to stay away from public demonstrations and consider leaving the country amid “reports of further unusual Russian military activity near Ukraine’s borders, including the border with Belarus.” Last week, State Department officials accused President Vladimir V. Putin of Russia of moving troops, tanks and other equipment into Belarus and positioning them to invade Ukraine under the guise of conducting military exercises.

Britain on Saturday accused Mr. Putin of plotting to replace Ukraine’s government with pro-Russian leaders, and the State Department has warned that Moscow could be planting false intelligence that could later be used to justify an invasion.

President Biden has been weighing several options that could expand America’s military presence in the region, including the deployment of several thousand U.S. troops, as well as warships and aircraft, to NATO allies in the Baltics and Eastern Europe.

William Taylor, a retired veteran diplomat who served twice as ambassador to Ukraine, said in an interview that he was not surprised by the State Department’s decision. He said that conversations about a potential evacuation had been taking place for one to two months between the embassy and State Department headquarters in Washington.

“I think this is a prudent step,” he said. “On the Russian side, there’s the continued buildup, the continued massing of troops.” He pointed out that the Russian military has missiles that can reach across Ukraine and weapons that can lob artillery shells deep into Ukraine.

And tensions could rise in the next week as the Biden administration steps up deterrence measures, said Mr. Taylor, who was most recently ambassador under President Donald J. Trump and testified in the former president’s first impeachment hearing, which was centered on a pressure campaign by Mr. Trump involving Ukraine.

The State Department occasionally thins out staff at American embassies and consulates as a precaution when conflicts or other crises arise that could put U.S. diplomats in harm’s way.

Officials in the Biden administration remain scarred by the sudden fall of Kabul, Afghanistan, to the Taliban last August, which resulted in the rushed evacuation of Afghan civilians, Americans and citizens of many other nations from the country.

Before the Taliban took over the city, Mr. Biden had said there would be “no circumstance” under which employees of the U.S. Embassy in Kabul would have to be evacuated by helicopter — a declaration made to calm fears of the kind of chaotic departure that occurred with the fall of Saigon to the North Vietnamese Army in April 1975.

Yet many people were transported by helicopter to the Kabul airport in August, with the scenes of panic and violence transmitted around the world.

Multiple U.S. embassies and consulates ordered all but essential employees home in 2020 as the coronavirus swept around the world. The American Embassy in Addis Ababa, Ethiopia, was one of the most recent to do so, in November, as violence in that country’s north threatened to overrun the capital. State Department officials have said the evacuation of the embassy in Kabul was a factor in that decision.

14.5M get health care under ACA

At a Moment in London Like No Other, Fashion Forges Ahead