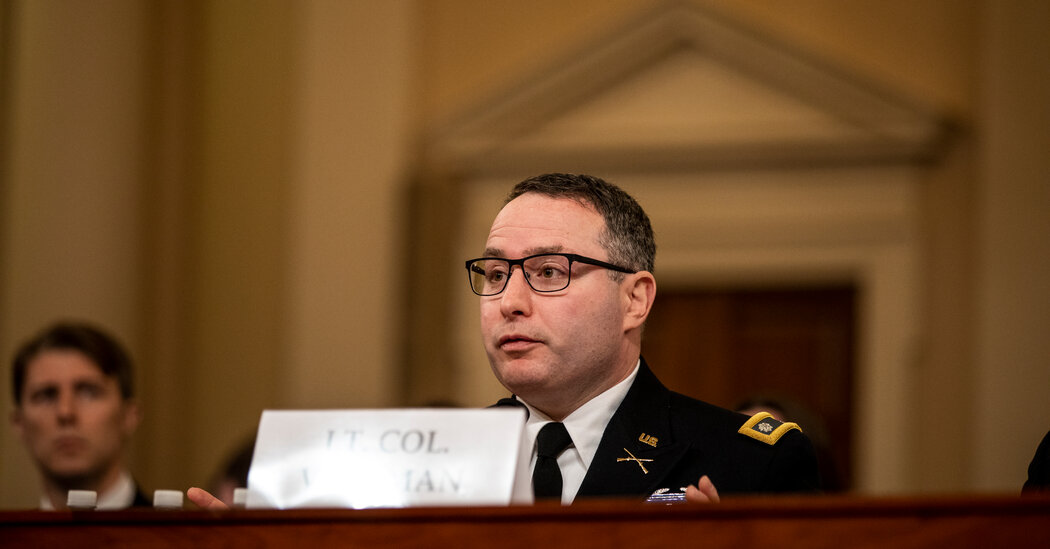 Alexander Vindman, the Army colonel who was a chief witness in President Donald J. Trump’s first impeachment trial, filed a lawsuit on Wednesday against Mr. Trump’s son, Donald Trump Jr.; Rudolph W. Giuliani; and two other top Trump White House aides, accusing them of running a coordinated intimidation and retaliation campaign to stop him from testifying.

The suit, which was filed in federal court in Washington, said that the defendants had spread false claims that Mr. Vindman was a Ukrainian spy, leaked classified information to undermine his credibility, falsely accused him of perjury and had him and his twin brother fired from their White House positions.

“This campaign of intimidation and retaliation has had severe and deeply personal ramifications for Lt. Col. Vindman,” the suit said, adding that Mr. Vindman had sustained “significant financial, emotional, and reputational harm” for testifying against Mr. Trump at the impeachment trial.

The suit, which did not say how much money Mr. Vindman was seeking, added: “It also left a stain on our democracy.”

The two others named as defendants in the lawsuit were Dan Scavino Jr., Mr. Trump’s longtime personal aide, who had control over Mr. Trump’s Twitter account; and Julia Hahn, a White House aide who previously worked at Breitbart News. Mr. Trump was not named as a defendant.

Mr. Vindman retired from the military in 2020 after he was promoted to colonel, a move Mr. Trump and his aides sought to block. At the time, Mr. Vindman’s lawyer said that he was retiring after suffering “through a campaign of bullying, intimidation and retaliation.”

Mr. Vindman, who was three when his family fled Ukraine, was serving as an official on the National Security Council in 2019 when Mr. Trump had a phone call with President Volodymyr Zelensky of Ukraine. On the call, Mr. Trump pressured Mr. Zelensky to investigate his rivals — including the son of Joseph R. Biden Jr. — at the same time the United States was withholding military aid from the country.

The call deeply unnerved Mr. Vindman, who reported his concerns to his boss. During Mr. Trump’s impeachment proceedings, Mr. Vindman testified that he had been alarmed as soon as he heard the exchange between the two leaders and again later, when a transcript of the call omitted crucial words and phrases uttered by Mr. Trump.

Mr. Vindman’s testimony turned out to be one of the most dramatic moments in the impeachment proceedings. Appearing in his Army dress uniform with his military ribbons, he provided a real-time view into the White House that showed how Mr. Trump’s aides scrambled to contain fallout from the call. He spoke in starkly personal terms about how he believed the exchange had undermined the national interest.

The lawsuit cited various public statements and Twitter posts by Mr. Trump’s confidants and allies in the media that attacked Mr. Vindman. It also included accusations that Mr. Vindman was a double agent who had loyalties to Ukraine.

During Mr. Vindman’s testimony, a top Republican staff member asked him about a classified interaction Mr. Vindman had in 2019, in which a top Ukrainian national security official asked him to serve as that country’s minister of defense. The suit said that the information could only have come from classified channels inside the White House.

Nevertheless, some conservative news outlets cast Mr. Vindman as someone who had dual loyalties. The day Mr. Vindman testified, Mr. Giuliani sought to raise doubts about Mr. Vindman’s loyalty to the United States.

“ANOTHER SCHIFFTY BACKFIRE: A US gov. employee who has reportedly been advising two gov’s?” Mr. Giuliani tweeted, using a play on words to refer to Representative Adam. B. Schiff, the California Democrat serving as the top impeachment manager.

In response to a tweet that showed Mr. Schiff thanking Mr. Vindman for his testimony, Mr. Giuliani tweeted: “Schiff is thanking him for his secret testimony and for giving advice to two countries. I thought he worked for US.”

In South Korea, a Hit Show Brings Autism Into the Spotlight

Reporter’s Notebook: A warning for Congress after the November midterms